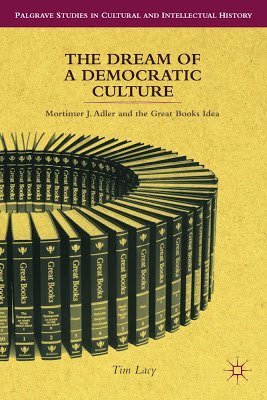 Anyone who travels through the history blogosphere knows the name Tim Lacy.  Tim is an active online writer and one of the founders of the Society for U.S. Intellectual History.  In fact, I would go so far as to say that he is partially responsible for a revival in the field of American intellectual history.

I am happy to learn of the release of Tim’s first book: The Dream of a Democratic Culture: Mortimer J. Adler and the Great Books Idea.  Here is the jacket blurb:

From the middle of the twentieth century to today, the Great Books idea has been perennially contested in successive iterations of the ‘culture wars.’ Whether embraced as the distillation of the best of Western culture or dismissed as hegemonic, elitist, and outdated, it has encapsulated the contradictions of intellectual life and civic culture in the era of American dominance. Drawing on previously unexamined sources, this book casts the Great Books idea in a new light, arguing that its proponents aimed to support an intellectually robust, consensus-oriented democratic culture. Moving from the concept’s origins in nineteenth-century cultural, industrial, and educational initiatives, author Tim Lacy highlights the life and career of Mortimer J. Adler, who moved the idea out of the academy and worked to weave it into social and cultural fabric of the United States. With attention to the frequently changing fortunes of the project and its own inherent virtues and vices, The Dream of a Democratic Culture conclusively shows that neither liberals nor conservatives can claim ownership of the Great Books idea, whose significance has always depended upon usage, selection criteria, and context.

Over at Religion in American History and the U.S. Intellectual History blog, Mark Edwards offers an early review of the book.  Here is a taste:

As his subtitle suggests, Lacy uses Adler to explore one of the most controversial subjects in twentieth-century American education, the “Great Books” movement.  I think, when most of us hear the words Great Books, we think Alan Bloom and conservative culture warriors.  One of Lacy’s central and most welcome contentions is that the Great Books idea has never been the sole possession of the American right or left.  Rather, both sides have, at different times, looked to such projects of cultural cohesion to save them from a variety of perceived existential threats (check out the conversation regarding Lacy’s 2011 blog post, “Great Books Liberalism,” for a nice introduction to the book).  Lacy is most concerned with, in his words, “those people, those mid-century intellectuals who promoted the great books idea, [who] shared an implicit, cosmopolitan dream of cultural democratization” (p. 6).