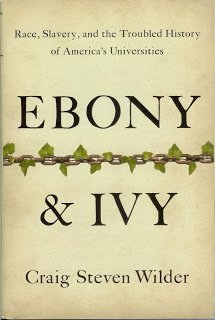 Although slavery is a well-known part of America’s past, most people do not think of the connection between the “peculiar institution” and America’s top colleges and universities.  Craig S. Wilder‘s new book, Ebony & Ivy: Race, Slavery, and the Troubled History of America’s Universities, explores the connection between colonial-era colleges and slavery.  David Walsh of the History News Network (HNN) conducted an interview with Wilder about his book that you can read here.  A taste:

To see that at Harvard in its earliest years, one of the residents of the campus was an enslaved man, or that the first eight presidents of Princeton – then the College of New Jersey – were slave owners, and enslaved people lived in the presidents’ houses and served the presidents and students. To see the evolution of the Harvard/Yale/Princeton faculties, and the founding moment of Yale, when the founding trustees gathered to plan out the organization and wrote the bylaws of the new school – they were actually accompanied by their slaves to that meeting.
So one of the things I found really interesting while researching the book was how intimate the relationship was between the academy and slavery in the colonial world, and how much these colonial institutions depended upon enslaved people, but also on the broader economy of the slave trade.