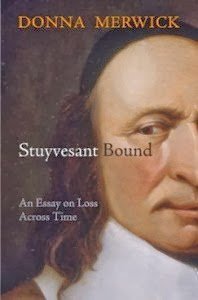 James Blackburn has written an excellent review of Donna Merwick’s new book Stuyvesant Bound: An Essay on Loss Across Time.  What most captivated me about this review (and by extension Merwick’s book, which I now want to read) is the way Blackburn focuses his review on Merwick’s attempt to teach us something about historical thinking.  Here is a taste:

The nation or country, what entity is of more importance to modern society?  What about capitalistic economy, secularization, democracy, and progress as normative American values.  All hold sway, for better or worse, on our perceptions of the world and our place within it.  And it is from this vantage point in modernity that we look towards the actions of those who lived before us, reaching back through time to filter the past through the eyes of the present.  This is history, and this is why the practice of history is an art and not a science. It is imperfect, an extension of the historian and the times in which they live.

But how then, asks Donna Merwick in Stuyvesant Bound: An Essay on Loss Across Time (University of Pennsylvania Press, 2013), can we better understand Peter Stuyvesant from our vantage point in the modern world, back to one that was premodern and existed between the post-Reformation and pre-Enlightenment periods.  A world in which the United States of America cannot be predicted or imagined, though the history written about Colonial America often chooses a narrative that fits into a story of nationalistic genesis.

A creation story that makes the founding of America seem both inevitable and secularly divine.  The histories of nations are filled with their own deities, prophets, and sacred texts.  In America, one has to look no farther than the Founding Fathers and the Constitution.  All this, a historian must weed through to find the North America of the seventeenth century in which the colony of New Netherlands existed, and where Peter Stuyvesant acted as Director-Governor for some seventeen years.  It is this place and time outside the confines of the nation state in which Merwick takes us.