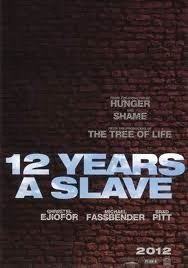 12 Years a Slave, the fictional adaptation of Solomon Northrup’s 1853 autobiography by the same name, has been getting a lot of attention of late.  Northrup was a free black man who was kidnapped in Washington D.C. in 1841 and sold into slavery.  For twelve years he was enslaved in Louisiana before he was set free.  The film is directed by Steve McQueen.

Over at The New Yorker, Annette Gordon-Reed, the Pulitzer Prize winning historian of Sally Hemings and Thomas Jefferson, reflects on historians, slave narratives, and the film. Here is a taste:
Another problem hovers over the slave narrative as a literary genre: the role that race and status played in the reception of stories told by members of a disfavored—or despised—racial group. It is one thing for a Solomon Northup to speak about individuals who are, in historical terms, unimportant in order to indict a system that most people recognize as abhorrent. It is another thing when a narrative presents information that many whites might not wish to hear or to accept.
I wrote an entire book about this issue, “Thomas Jefferson and Sally Hemings: An American Controversy,” examining in minute detail one historical controversy as it plays out in family letters and slave narratives. There was, I found, a double standard in the treatment of the recollections of a powerful slave-holding family, which were memorialized in their personal letters, and those of the people enslaved on their plantation, which were given to an interviewer. It would have been a simple matter to recognize the unique concerns raised by each item of evidence and then research around the dispute to determine which version was more likely. Instead, the power that the letter writers had in life, and the relative powerlessness of those who gave the interviews, was simply reconstituted in the pages of history.
With that said, the writing that has been done in the past sixty years on slavery is, I believe, the crown jewel of American historiography. But as much good work as has been done, there is even more to do. It will be wonderful if “12 Years a Slave” not only introduces millions to Solomon Northup but propels them into libraries and bookstores to read the stories that have been told about the institution that haunts us to this day.