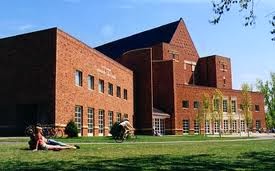 I appreciate Chris Gehrz’s honest appraisal of the struggles facing Christian colleges and universities in the United States and particularly his own institution, Bethel University in St. Paul.  Messiah College, the Christian college where I teach, has faced some financial struggles in the last few years as well, but thankfully we have not come anywhere near the point of laying off faculty members.

I think Chris’s call for churches and individual Christians to support Christian higher education should be read by all pastors and church leaders.  Here is a taste:

As a church chairperson myself, I understand that budgets are tight. Even those of our congregations that have weathered the Great Recession and managed to expand our ministries have had to make hard choices, sometimes cutting back in one area to support growth in another. I’m in no position to tell any church or denomination that its priorities are out of line.
But I do know how easy it is to undervalue what Christian higher education — particularly as it is rooted in the liberal arts — accomplishes. Much of what we do pays off in the long run, and then often in hard-to-measure ways that might seem only indirectly connected to the mission of Christian churches.
So let me take a shot at persuading you — as someone who makes or votes on a church or denomination budget — of the value of what we do in Christian higher education, particularly via the liberal arts. There’s much that I want to say, but knowing that I’ve already tried your patience and eyes with this missive, I’ll limit myself to one argument:
If you want to be missional, you need to support Christian higher education.
Supporting the mission of the Body of Christ is the oldest, most enduring value of church-subsidized higher education. Indeed, the founding impetus of most CCCU members was the need to train pastors, missionaries, evangelists, church musicians, and Christian education specialists. And schools like ours still provide their sponsoring churches with such essential labor.
To be sure, much of this training happens in seminaries and divinity schools, and our seminary needs financial help as much as the college. (Its faculty are also steeling themselves to receive administrator calls today.) But I only need look to the three pastors who preach most regularly in my own church to know the value of supporting colleges that are strong in the liberal arts: our senior pastor is a former History major who is able to bring biblical context to life; on the Sundays he doesn’t preach, the pulpit is usually filled either by a former English major whose sermons are rich with poetic language or by a former Philosophy major who helps us navigate the paradox and ambiguity we encounter in some of Scripture’s harder, more opaque teachings.
But in churches where all believers are priests, called to minister using whatever gifts and talents the Spirit provides them, then it is also important to think about the ways that Christian higher education founded on the liberal arts prepares laypeople to share in the millennia-old mission of Christ’s church in our present contexts.
First, it produces graduates who have the knowledge and skills to be part of a shrinking world in which Christianity is growing much faster outside our borders than inside it. Thanks to our curriculum, for example, our graduates have proficiency in a language like Spanish, French, or Chinese and have taken multiple courses on cultures other than their own (and engaged in experiential learning across cultures). Something like three-quarters have them have spent at least some of their undergraduate education outside of this country.
Second, in an age when American churches have to recognize that the “mission field” is next door, that it’s as important to be Jesus’ witnesses in our equivalents of Jerusalem, Judea, and Samaria as to the “ends of the earth,” it’s impossible to overstate the value of an education that gives its graduates the knowledge and skills to live in their culture but not of it. Where I teach, general education begins with a multidisciplinary course that prompts students to study the history of Christianity’s interactions with Western culture — not to glorify the West, but to help largely middle-class Americans think critically about the values, practices, and assumptions of the culture that surrounds them. That curriculum continues with courses that help students think more deeply about the role of science and technology in our society, and many other contemporary issues — and all in light of our conviction that Jesus Christ is the source of all truth. I know of no other model of education that is better suited to renew the minds of young adults who otherwise face enormous pressure (sometimes from educational institutions) to “conform to the pattern of this world” (Rom 12:2).
Third, a Christian college education — unlike most others — engages in transformation, not merely information. Education is often said to focus on head, heart, or hands. Most colleges and universities aspire to shape one, perhaps two of those. Some offer tremendous intellectual rigor, but are unconcerned about moral or character formation. Some do an excellent job of training graduates for important careers, but have limited intellectual scope. Christian colleges are some of the only such institutions of which I’m aware that take seriously the whole person: we cultivate the life of the mind and foster the habits of lifelong learning; we soften hearts to love God and neighbor; and we train hands to do the work of Christ in this world, in all manner of careers and callings.
My education, said one alumna I interviewed this summer, “didn’t prepare me to do any specific job, but it prepared me to be the person that I am…. Who I became [there] has everything to do with how I got a job and how I stay in it, and who I am – having fidelity to who I am in Christ…”
Of course, churches engage in formation as well as worship, evangelism, missions, outreach, and other ministries: but many will struggle to do so lacking pastoral and lay leaders who have received a holistic, Christ-centered education that teaches them who, and whose, they are.