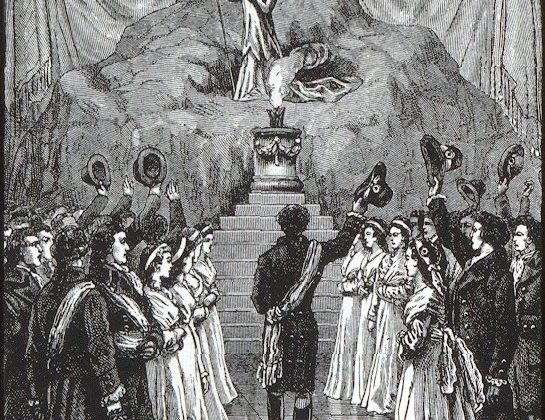 Over at The Anxious Bench, Tal Howard has written a very informative piece on the role of religion in the American Revolution and the French Revolution.  Drawing upon Turkish scholar Ahmet T. Kuru, Howard uses the term “passive secularism” to describe the U.S. approach to religious freedom, and “assertive secularism” to describe the anti-Christian dimensions (1790s) of the French Revolution.

In contrast to the passive secularism of the United States, the French Revolution left a legacy of assertive secularism, to quote Kuru again.  While not without European critics (see Edmund Burke), this legacy has informed many republican and socialist ideologies (see Karl Marx) and movements on the Continent during the nineteenth century, and received transmogrified political expression after the Bolshevik Revolution of 1917.   In a more benign form, it lives on in France today in the form of strong anti-Catholicism among secular elites and in laws banning headscarves and other religious images from public places.

In our discourse about religion and public life, one often hears general references to “Western secularism,” frequently in reference to its possible applicability to Muslim countries as they struggle today to find a path toward democracy and freedom.  This assumes, of course, that “Western secularism” is a unitary phenomenon.   It is not.  It comes in multiple versions, often tied to the particular historical experience of continents, countries, and regions.  At the very least, we need to distinguish between American and French revolutionary trajectories of secularism and their respective implications for present-day geopolitical realities.  Doing so would enrich analyses of contemporary affairs, for you can’t think well about the present until you see clear-eyed into the past.