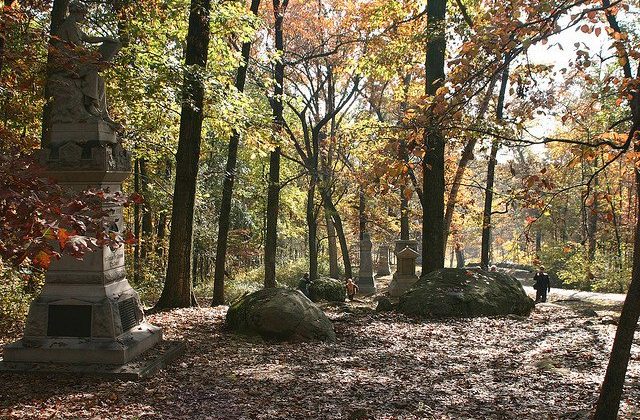 What would the 150th anniversary of the Battle of Gettysburg be without reenactors?

Some of you will remember “Lewis Norman,” our soldier’s correspondent from the Civil War.  Norman has taken us through the battles of Bull Run, Ball’s Bluff, McDowell, and Chancellorsville and in the process has offered some reflections on “living history” (reenacting) as a form of public history.
Today we have a piece from Willie P. Mangum. (Not his real name). Willie is a Ph.D candidate in American history and a Confederate reenactor.  I hope you enjoy his piece on living history and race at a Culp’s Hill reenactment.  Enjoy!  –JF
I have reenacted the Civil War for over twenty-five years and cannot escape the boyish joy of material culture, hanging with friends in the woods, and playing army. At the same time I am an academic historian very aware of the hobby’s limitations in the modern historiographical landscape. Because of this bifurcation of my historical interests, reenactments like the one I participated in last weekend at Gettysburg are filled with satisfaction, anger, and uncertainty. Let me explain with one example.
On Saturday evening our small group of Confederates assaulted the fortified Union position on “Culp’s Hill.” The actual “fight” went so much better than the highly choreographed and completely dull and misleading scripted scenarios the spectators see in the open fields. Our lines went up the wooded and rocky hill in repeated waves, double-quicking through the thorny brush and just as quickly falling back before heavy Federal fire. As one line fell back, another pushed through it to the front.
I challenged my friend to see who could make it further to the top amid the confusion. Like most Confederate soldiers at Culp’s Hill, I eventually “took a hit.” This meant that my exhausted legs faltered, I stumbled on rocks, I lost my balance, and fell to the ground in a twisted lump. At least it was several yards ahead of my friend.
We lay “wounded” just yards from the Union position. My friend and I gave ourselves over to the Yankees as prisoners and their guards corralled us with others in a huddled circle behind their lines. I wasn’t particularly trying to be in character aside from just acting defeated. I sat with my arms crossed before my knees and my head down.
Others, however, attempted to express the recently-captured experience by being loud and defiant. Maybe they were correct in their portrayal, but the efforts to protect their officer from separation or help a wounded friend was hindered by poorly performed stage drama that made me want to get away from it all.
We eventually did, but before that I witnessed an extremely unique and complicated scene. As we sat in our prisoner pile, an African-American gentleman walked into our midst and began rifling through our haversacks. (I recognized this man from other events and know him to be a high-quality living historian, but I don’t know him personally.) He took all the food and bags of tobacco he could find.  This was unusual for a number of reasons. All of our gear and possessions are considered personal property and usually a scenario involving theft is followed by a return of the “stolen” goods. But as far as I could tell, he kept everything. I liked that, probably because I didn’t wear my haversack for that scenario and thus lost no food or tobacco.
But the more intriguing aspect of this “theft” was how his actions represented the seriously inverted power dynamics present in the later years of the Civil War. This man walked among us with an air of impunity, not even stopping to acknowledge the men he pilfered. I recalled the many historical instances of newly freed black men and women who exerted personhood and independence by haughty and contemptuous treatment of former masters. I never see this at reenactments and here it was happening before me. What a thrill.
What elevated his actions even further was the reaction of some of the prisoners who resisted this freedman with impotent epithets of outrage. This improvised moment was a rather sophisticated and fascinating look into the evolving racial realities for Confederate soldiers and black men as slavery fell apart.
While I observed this, I also cringed. In hindsight I am certain the prisoners who reacted were doing so “in character” and did not harbor any actual animosity toward an African-American reenactor (who they might well have known). But this hobby is full of people who are not shy about expressing modern opinions about race and racial politics that liberal academics like me consider uncouth, at best. While I watched the interactions, I feared that the wrong word might get aired or a genuinely insensitive sentiment might have been uncovered. I prayed that it would end before one did.
As the scenario wound down my friend and I prepared to depart the area. As I left, I saw the African-American gentleman. I had to say something about how much I appreciated his portrayal and what he had just done. I croaked out a quick “that was good, thank you” in passing. Unless I missed something, I don’t think he acknowledged me. As I slunk back over the breastworks toward our own line I wondered if he harbored the same uncertainty about me as I did toward the prisoners he had just agitated. I was, as we academics say, troubled.