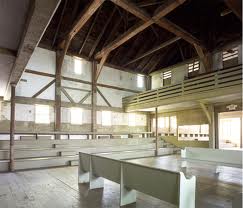 I just finished a rather full day of touring, speaking, and eating in lovely Newport, R.I.  If you are a regular reader of The Way of Improvement Leads Home you know that I am up here to participate in a panel discussion on religious freedom and the American founding sponsored by the Newport Historical Society.

The day began with a whirlwind tour of colonial and revolutionary Newport.  Until today I did not know that Newport has more pre-1776 buildings than any other city in America.  My tour guide was Katie Garland, a 2012 Messiah College graduate who is currently a graduate student in public history at the University of Massachusetts-Amherst.  Katie is interning this summer at the Newport Historical Society and has quickly become an expert on all things Newport.

Katie took me to several important colonial and revolutionary sites including the Touro Synagogue (oldest synagogue building in the country and second oldest Jewish congregation), the Great Friends Meeting House (the oldest place of worship in Rhode Island dating back to 1699), the home of Calvinist minister Ezra Stiles, a 7th Day Baptist meeting house from the 1730s (which is part of the building that houses the Newport Historical Society),  the oldest lending library in America, the Newport Colony House (the site of the Stamp Act Riots in Newport), and several other buildings.  I also got my first glimpse of the famous Newport mansions.  Newport is loaded with early American history and I hope to come back soon.

In the late afternoon a crowd gathered in the Great Friends Meeting House for a panel discussion entitled “How Christian an Understanding?”  I was joined on the panel by John Barry, author of the best-selling Roger Williams and the Creation of the American Soul and Michael Feldberg of the George Washington Institute for Religious Freedom.  The panel moderator was Daniel Cowdin of Salve Regina University in Newport. Ruth Taylor of the Newport Historical Society was the host for the event.

As might be expected, I spoke about some of the themes I wrote about in Was America Founded as a Christian Nation: A Historical Introduction.  I reminded the audience to use the past responsibly when employing it in arguments about whether America was or wasn’t founded as a Christian nation.  The past can be both a guide for the present and a “foreign country.”  We should thus be careful how we use it in contemporary debates.  I then focused on three points:

1.  The fact the founding fathers, to a man, believed in liberty of conscience in matters of religion.

2. The fact that many so-called “founders” included either religious establishments or religious oaths for office in the state constitutions that they wrote.

3.  The fact that the 1947 Everson v. Board of Education decision, which declared that there was a “wall of separation between church and state” that was “high and impregnable,” did not necessarily represent the way church and state issues had been handled, officially or unofficially, between 1789 and 1947.

John Barry discussed the career of Roger Williams and how he, despite his deep Calvinist faith, parted ways with the Puritans on the question of the separation of church and state.  I also learned that Barry ended up writing about Roger Williams after a false start on a book about Billy Sunday and religion and politics in World War I America.  It was good meeting Barry, especially after I reviewed Roger Williams and the Creation of the American Soul in Christian Century last year.

Before starting the George Washington Institute for Religious Freedom, Michael Feldberg was the long-time archivist at the American Jewish Historical Society in New York.  Feldberg pulled no punches in arguing that the United States was founded as a Christian nation, at least demographically and culturally.  I also learned from Feldberg that despite Rhode Island’s staunch commitment to religious freedom, Jews were not permitted to vote in elections because they could not swear a Christian oath.  Feldberg is doing some very interesting work on the history of George Washington’s 1790 letter to the Touro congregation/synagogue and he will coming out shortly with a book on the subject.

After the event I said my farewell (at least for now) to Katie and headed off to dinner with the members of the panel, Ruth Taylor, and a host of dignitaries from the Rhode Island historical community.  It was fascinating to learn about their planning and preparation for the 350th anniversary of the original Rhode Island charter of 1663.

Back to Pennsylvania tomorrow, assuming I can get the slow leak in my car’s tire patched up.