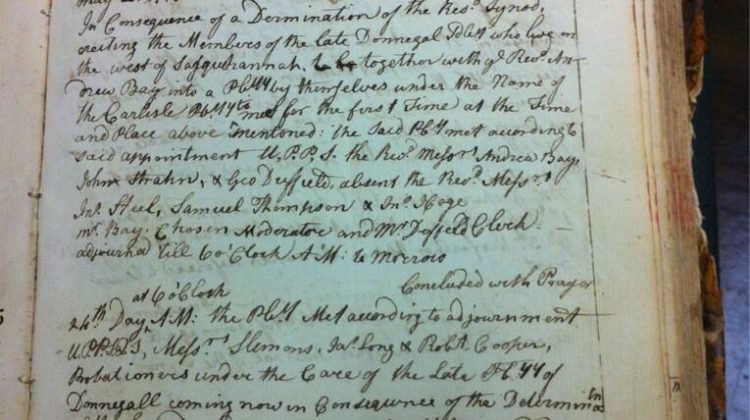 I spent most of the day (along with Megan and Brianna) on Thursday working through presbytery minutes at the Presbyterian Historical Society.  We read the eighteenth-century minutes (roughly between 1740 and 1790) of the Donegal, Philadelphia, New York, Lancaster, and Carlisle Presbyteries.  Here are some of the things we hoped to find:

1.  References to the James Caldwell.  As part of my consulting project this summer we are trying to gather everything we can about this revolutionary-era pastor of the Elizabeth-Town (NJ) Presbyterian Church.  Caldwell was a member of the New York Presbytery, but he makes occasional appearances in the records of other presbyteries as well.

2.  References to the Paxton Boys.  I am working on a paper/chapter on Presbyterianism and the Paxton riots.  There is no mention of the Paxton riots in any of these minutes, but it was still worth checking. Presbytery meetings usually stay focused, at least officially, on the life of the Presbyterian Church.  This includes cases of discipline, pulpit supply, and other ecclesiastical affairs.  It is not until the Revolution that public and political issues are mentioned (see below).

3.  One of the chapters in my current project will deal with the role of the church in the decade or two following the First Great Awakening.  We are thus looking specifically for the ways in which the presbyteries and local churches responded to the Plan of Union that reunited the Old Side and the New Side in 1758.  Some of my argument on this front appeared in chapter two of The Way of Improvement Leads Home.

4.  The American Revolution.  We are looking at the ways in which the Revolution affected Presbyterian life and how Presbyterians responded to the Revolution.  For example, many presbyteries did not meet during the war.  Others made proclamations or comments about the “troubled state of affairs.”

We probably have a few more days left in the PHS.  Stay tuned…next week’s Virtual Office Hours will be coming to you from Philadelphia.