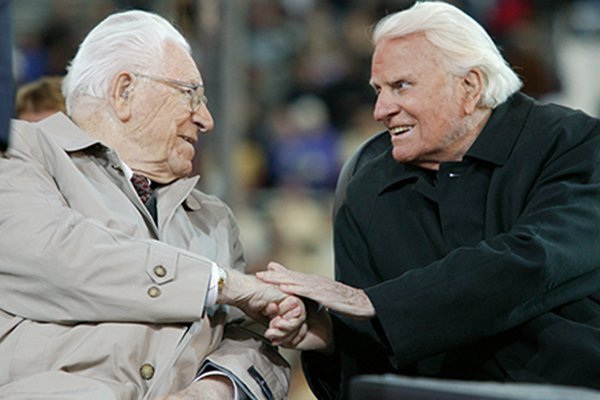 Billy Graham once told the New York Times that without singer George Beverly Shea “he would have had no ministry.”  Shea died April 16, 2013 at the age of 104 and Douglas Harrison remembers him in a piece at Religion Dispatches.  He reminds us that in the early days of the Graham ministry, Shea was the “bigger name of the two.”  He was a gospel music star who, according to Harrison, was the forerunner of Christian Contemporary Music (CCM).  Here is a taste:

Shea’s brand was built on both the pious solemnity of congregational worship, and the warmhearted magnetism of an iconic performer. In this, he embodied a form of Christian celebrity that successfully merged and managed the longstanding tension in gospel between the ministerial and recreational functions of Christian music.

Pulling off this merger of ministry and entertainment was trickier than Shea’s avuncular gracefulness suggested. The meteoric rise and scandalous collapse of Aimee Semple McPherson stand now—and stood in Shea’s time—as a potent parable of the promise and peril of twentieth-century Christian megastardom.

Graham’s wholesome Brother Billy persona was of course one powerful alternative for middle-class evangelicals who wanted to look up and away from Sister Aimee’s down-market unseemliness. Shea’s success distinguished itself for being both more explicitly commercialized than Graham’s, while also retaining all the bourgeois respectability so often found missing in the tawdriness of the Elmer Gantrified competition—the faith healers and the New Thought movement and the flamboyant prophets of prosperity gospel.

Consequently, Shea’s rise represented a much greater movement in the post-modernization of evangelical culture: Shea received the highest honors bestowed by both the commercial world (Grammys and Dove Awards) and evangelicalism’s denominational hierarchy (he was a member of the inaugural class of the Conference of Southern Baptist Evangelists’ Hall of Faith). In short, Shea helped the worshiping faithful understand the purchasing power of Christian consumers as an extension of their piety, as form of devotional practice that encompassed the ordinary pleasures of music entertainment.

So the next time you encounter Mercy Me or Michael W. Smith or Gaither Vocal Band, listen closely: there’ll be some of Bev Shea’s grace notes in the mix somewhere.