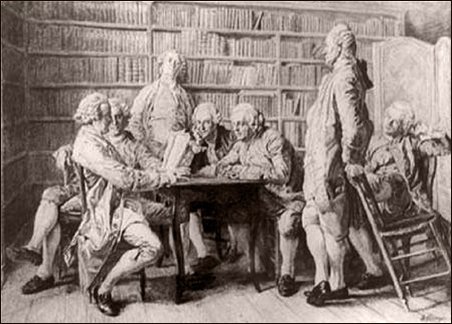 Whenever I teach The Autobiography of Benjamin Franklin I spend some time talking about The Junto–Franklin’s club for mutual improvement.  Here is how Franklin describes the Junto:

I should have mentioned before, that, in the autumn of the preceding year, [1727] I had form’d most of my ingenious acquaintance into a club of mutual improvement, which we called the Junto; we met on Friday evenings. The rules that I drew up required that every member, in his turn, should produce one or more queries on any point of Morals, Politics, or Natural Philosophy, to be discuss’d by the company; and once in three months produce and read an essay of his own writing, on any subject he pleased. Our debates were to be under the direction of a president, and to be conducted in the sincere spirit of inquiry after truth, without fondness for dispute or desire of victory; and to prevent warmth, all expressions of positiveness in opinions, or direct contradiction, were after some time made contraband, and prohibited under small pecuniary penalties.

Several years ago I suggested that we need more Junto’s in our colleges and universities. Here is part of what I wrote in that post:

I usually teach the Autobiography once a year and I always make a point of emphasizing this passage. I ask my students to consider the possibility of leaving history class and joining a group of fellow students in an extended conversation about the ideas discussed that day. Most students have never really pondered such a concept. The thought of going back to their dorms and discussing the impact of industrialization on rural life in the nineteenth century is an absurd one. For them college is about getting a degree or developing some kind of practical skill that they could use to make a living. In such an economic climate as the one in which we live today, to suggest that students should spend time discussing ideas in a Junto-like fashion seems useless or at least a bad use of one’s time.

My Junto sermon ends by explaining to my students how a truly liberally educated person needs to be engaged with the world of ideas. I expound on how ideas have social consequences and can be useful in real life. Ideas can often motivate people to serve others and the common good, a thought that I hope has some appeal among my Christian students. I then, in good Puritan homiletical style, hit them with the “application” by exhorting them to start a Junto of their own. I reinforce the message of this sermon throughout the semester. Whenever we run across a big idea (which is basically every class period), I finish class by telling the students to “continue the discussions in their Juntos.” The remark usually gets a laugh as students pack up their books, but that is about it.

Is it too much to ask that students take the ideas they learn in class and make a conscious and deliberate effort to converse about them away from the classroom? I know today’s students are extremely busy, but Franklin and his Junto managed to put aside a small amount of time each week for this kind activity. Students can find plenty of time for Facebook, Myspace, weekend road trips, and video-games. Why not ideas?

I know of several groups of students who have formed Juntos after reading the Autobiography.  During my first several years at Messiah College, a group of students met weekly in the college snack shop.  Another group of students at Northwestern College formed a Junto that read, among other works, The Way of Improvement Leads Home.  And over the years a few more Juntos were created by Messiah history majors.

The latest Junto is made up of a group of sophomore history majors at Messiah College.  They call themselves “Reckless Historians” and have created a blog by the same name.  If you are an undergraduate historian, a history major, or simply someone with a passion for learning more about the past, I would encourage you to check them out.