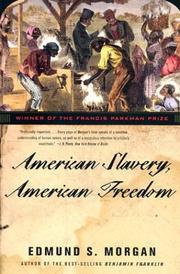 It’s official.  As expected, Edmund Morgan’s American Slavery, American Freedom: The Ordeal of Colonial Virginia is the winner of the The Junto blog’s early American history March Madness tournament.  Morgan handily defeated William Cronon’s Changes in the Land: Indians, Colonists, and the Ecology of New England by a count of 65% to 35%.

Probably expected to most readers given the book’s performance thus far, we at The Junto are pleased to announce Edmund Morgan’s American Slavery, American Freedom to be the winner of the 2013 Early American History Tournament. Cronon put up a fight, but in the end Morgan pulled away with 65% of the vote. You could call this an end-to-end victory, since Morgan’s book received the most nominations, was never really challenged, and always seemed destined for the title. And this may be fitting: the book is magisterial in research, exquisitely written, and still relevant to any project on colonial history. (Not to mention it works great in the classroom!) It is a testament to its power that American Slavery is still en vogue three and a half decades after its release. Sure, there are problems, but the book still challenges and provokes any close reader, and that is one of scholarship’s true purposes.

I am sure the students in my British colonial America course are happy with the results. We read American Slavery, American Freedom earlier in the semester and I know that some of them voted in The Junto tournament.