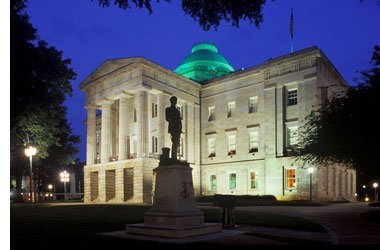 In light of the attempt of some North Carolina legislators to create a religious establishment in the state, Brian Palmer, writing at Slate, asks if unconstitutional state laws “stay on the books forever?”

This comes up every now and then.  As Palmer points out, Texas has a law on the books criminalizing homosexual sex.  Several states, including my own Pennsylvania, have laws that forbid atheists from holding office.  Some of these laws remain on the books, while others are repealed.


If North Carolina were to officially declare a state religion, the courts would be more likely to intercede. Declaring a state religion isn’t a consequence-free declaration like picking a state bird, a state flower, or a state fossil. Naming a state religion is more analogous to erecting a Ten Commandments monument in the state Supreme Court building. Members of other religions could challenge the move on the grounds that it offends their belief system and suggests state preference for one religion over another.