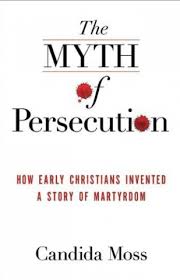 I grew up hearing that “the blood of the martyrs was the seed of the church.”  Some Christians today claim that the church has lost its prophetic edge because, since Constantine, it has enjoyed a privileged position in government and culture.  These prophets and theologians claim that it was persecution–especially under the Roman Empire in the first century or two after the death of Christ–that led to the rapid growth of Christianity.

Candida Moss, a professor of New Testament and early Christianity at Notre Dame, does not buy any of this traditional narrative.  In her new book, The Myth of Persecution: How Early Christians Invented the Story of Matrydom, Moss suggests the story of early Christian persecution was constructed by fifth century (and beyond) Christians.  Here is a taste of a recent piece she wrote for The Daily Beast:

With the exception of the Great Persecution of Diocletian (AD 303-305), when Christians were indeed actively persecuted, it is difficult to find any examples of Roman emperors behaving as Christians typically portrayed them. Apart from this comparatively brief period, and an even briefer one during the reign of Valerian in 257-58, Roman emperors never targeted Christians for attack. At the beginning of the second century, the emperor Trajan actually stipulated that Christians were not to be sought out. Roman emperors simply don’t appear to have been that interested in Christians. For most of the first three centuries of their existence Christians flourished: they held lofty political positions, and were so comfortable under the Romans that they even constructed a prominent church across the road from the imperial palace in Nicomedia.

The overwhelming majority of Christians idealized martyrdom and suffering like Jesus, but very few of them died violently—and even fewer died as the result of the kind of persecution described in Sunday school. Romans had good reason to be concerned about Christians. Scandalous rumors of Christians participating in incestuous orgies and practicing cannibalism were widely circulated. More important, Christians sounded a lot like revolutionaries. In courtrooms they stated that they were unable to respect anyone but Christ, their new emperor. Roman officials had no problem executing political subversives—this was a world in which Jon Stewart would be executed for his institution-challenging satire. Ancient empires were accustomed to reshaping the religious identities of those they bested in war. The Romans magnanimously allowed conquered groups to maintain their own religious traditions and implement their own law at their own discretion. But this generosity ended when it became socially disruptive or politically subversive. Christians threatened the stability of the empire, and when we look at their interactions with Roman authorities, we might even find ourselves sympathizing with the Romans.