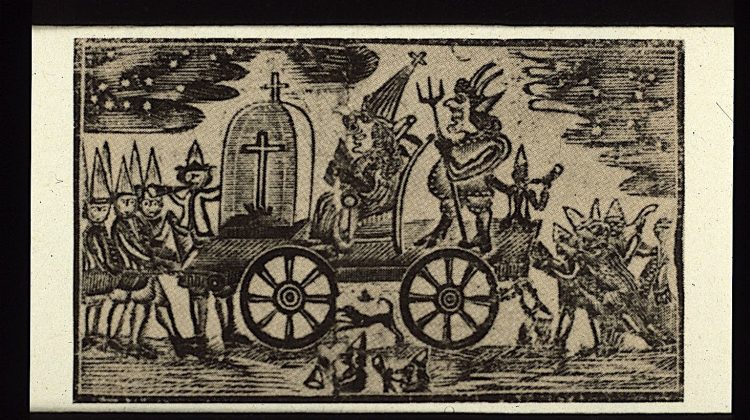 Yesterday I did a phone interview with John Turner‘s American religious history class at George Mason University and one of the students asked me about anti-Catholicism and the founding fathers. I talked a little bit about why Catholicism was a threat to the largely Protestant colonies and how many of the founders were anti-Catholic in their religious sentiments.

I could have also called the students’ attention to Emilie Haertsch’s recent post at The Beehive, the blog of the Massachusetts Historical Society. Haertsch writes about the first Roman Catholic parish in Boston.  I was struck (but not surprised) that a Catholic parish was not founded in this Puritan stronghold until 1788.

…when the Massachusetts Constitution took effect in 1780 it became legal for Catholics to practice publicly. The Rev. Claudius Florent Bouchard de la Poterie, a former French naval chaplain, established the first Catholic parish in New England in 1788 on School Street in Boston, and he celebrated the first mass there on November 2, the Catholic feast of All Souls’ Day.

So exotic was Catholic worship to Bostonians when the parish opened that La Poterie felt it necessary to write an explanation of Catholic practices in order to show that there was nothing to fear. In 1789 he published a pastoral letter titled “The Solemnity of the Holy Time of Easter: The Order of the public Offices, and of the Divine Service, during the Fortnight of Easter, in the Catholick Church of the Holy Cross at Boston,” a copy of which the Society has in its collections. His explanation begins with Palm Sunday, continues through Holy Week, and finishes with Easter Sunday. He writes of the “paschal duty” of Catholics to receive the sacrament of reconciliation and the subsequent availability of daily confession to Catholics throughout Holy Week. La Poterie also illuminates the ritual surrounding Holy Thursday mass, including the washing of the “feet of 12 lads, between 10 and 14 years of age; the poorest will have the preference.” The 12 boys represented the 12 apostles, who had their feet washed by Jesus in the Gospel. La Poterie also describes the importance of the Easter Vigil mass as the time when new Catholics are welcomed into the Church through baptism.