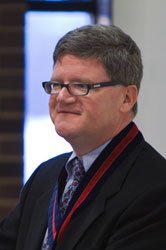 As some the readers of The Way of Improvement Leads Home already know, the University of Illinois at Chicago has a thriving Catholic Studies Program. Kevin Schultz, author of Tri-Faith America: How Catholics and Jews Held Postwar America to Its Protestant Promise and HIST teaches in the program.  So does Ralph Keen, the Arthur J. Schmitt Foundation Chair in Catholic Studies.

Over at Religion in American History, Keen discusses what it is like to teach Catholic Studies at a secular university.  Here is a taste:

What is the study of Catholicism doing in the curriculum of a state institution? The question is never asked quite so directly, but it should be. The Catholic university system has been the custodian of this field since its inception, guarding the legacy and interpreting it for the next generation of Catholic citizens. The non-denominational private sector entered the field a few decades ago, often with endowed chairs funded by Catholic donors or agencies. Most recently there have been positions in Catholicism at state institutions, and degree programs in Catholic Studies can be expected to take their place alongside similar units as a natural development.
At the University of Illinois at Chicago, such a program has been in the making for years, and a BA minor in Catholic Studies is close to being a reality. Core faculty include a specialist in North American Catholicism, one in Latin American intellectual history, and another in the history of theology in the early-modern period, “early Catholicism” for those who see the confessional tradition beginning with the Counter-Reformation. All three are located in the history department. Affiliated faculty offer courses housed in their home departments which are cross-listed with Catholic Studies. Even so, only a portion of the tradition is covered in course offerings.

UIC is an urban public R1, a gateway institution with a highly diverse study body. The majority of our undergraduates are first-generation college students. About half the students identify as Catholic, most of these being Latino, with Eastern European the second-largest segment. One learns fairly soon in Catholic Studies courses, where perhaps ¾ of the students are from these backgrounds, that Catholic is their primary identity marker, the one thing that has not been in flux in their or their parents’ lives.

Pedagogically this means that there is a substantial element of trust in the relationship between class and instructor. The professor respects his or her students’ piety, and they in turn trust that the tradition that is holy to them will be presented in a way that is academically rigorous but not iconoclastic. On a campus intentionally secular and progressive, this means being apolitical as well as non-confessional in one’s approach. “I try to teach in such a way that my own perspective is never known,” says one instructor in the program. What Philip Jenkins a decade ago called the last acceptable prejudice sadly persists in academe: anti-Catholicism is alive and well, and Catholic students are rightly suspicious of many faculty. Their willingness to take seriously what one teaches is tied to their confidence that their instructors will not belittle that which is sacred to them.