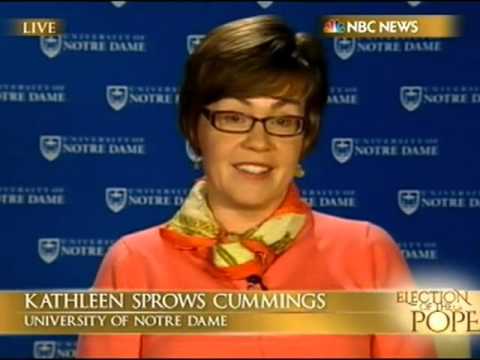 Kathy Sprows Cummings, the Director of the Cushwa Center for the Study of American Catholicism, is on fire!  If you have been following the blog, you know that she recently appeared with Brian Williams on NBC News.  Now today she has a piece at CNN titled “Can Pope Bridge Gape Between America and Rome.”  Kathy reminds us that Francis is “an American pope.”  Here is a taste:

Bergoglio’s style may signify an even more meaningful departure from longstanding tradition. By now, everyone knows that the Archbishop of Buenos Aires eschewed many of the privileges that come with being a prince of the Church. And if the first day of his pontificate are any guide, he plans to continue doing so, at least to the extent it is possible. My Facebook feed yesterday was full of gleeful pictures and posts: Pope Francis rode the bus with the cardinals! He refused the papal limo on his trip to Santa Maria Maggiore! He paid his own hotel bill! At a time when clerical privilege is widely viewed as, at best, a vestige of a spirituality that no longer holds, and, at worst, justification for sheltering criminals, any sign of resistance to it at the Vatican will be most welcome.

Catholics in the United States have always grappled with the tension that comes from living in a culture that adapts readily and rapidly, and being faithful to a church that changes only slowly and with great caution. The chasm between Rome and America may seem especially wide at this historical juncture, and how effective Papa Francesco will be in bridging it remains to be seen. What is certain is that the tone of the first 24 hours of the new pope would have been markedly less optimistic had a Vatican insider stepped out on that balcony.

Rumor has it that she also has a forthcoming piece that will appear soon in The New York Daily News.  Stay tuned.