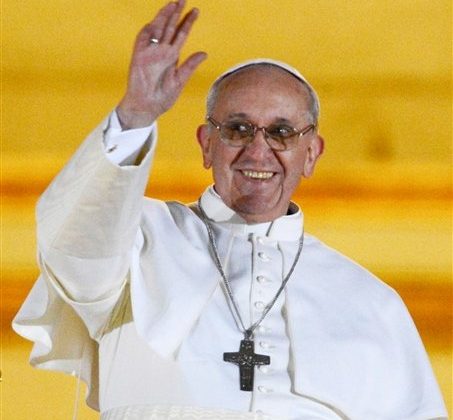 Francis is known for simplicity, a commitment to the poor, and personal holiness. He was reportedly the runner-up in 2005.

Here is a taste of Nixon‘s recent post at dotCommonweal:

As many others have observed, Bergoglio has similar qualities.  He famously urged those interested in coming to his installation as archbishop to stay home and give the money to the poor.  Rather than live in the archbishop’s mansion, he chose to live in an apartment and apparently takes public transit to work (I wonder if he realizes yet that he will never do so again).  It is also reported that when he was made a cardinal, he chose to alter his predecessor’s robes rather than paying for new ones.  His choice of “Francis” as a name is, to put it mildly, extremely bold and suggests a strong identification with the poor.

In the runup to the conclave, many cardinals appeared to understand that the Church’s witness is the most powerful and compelling when it is voiced from a place of simplicity and humility.  It is then that the Church best conveys the simplicity and humility of Christ himself.  Francis’ decision to ask the crowd assembled in St. Peter’s Square to bless him before he blessed them was a powerful symbol in that regard.

Bergoglio was also, of course, from Latin America.  He reportedly came in second in the 2005 conclave, suggesting a strong base of support for a candidate from the developing world.  I don’t know whether the cardinals from Asia or Africa put forward any “favorite sons” on the first ballot, but I suspect the list of non-European candidates probably winnowed to Bergoglio and Scherer rather quickly, in which case the choice of both the critics of the Curia and those favoring a Third-World pontiff was probably clear.

A number of observers have described Bergoglio as a “conservative,” although I’m not clear what criteria they are using to make that judgment.  If the test is his opposition to same-sex marriage and legal abortion then the entire conclave was comprised of “conservatives” in which case the category is analytically useless.