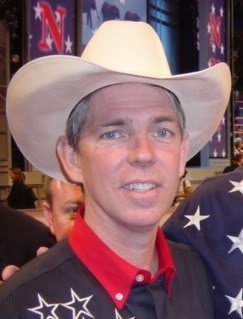 The rumors are true.  David Barton’s story about children with guns in a 19th century classroom came directly from a Louis L’Amour novel.

You may recall a post we did early this month where I reported that Barton debunkers Chris Rodda and Warren Throckmorton traced Barton’s comments on gun control to a L’Amour novel.  Here is what Barton said on the Glenn Back show:

The great example, in the 1850s you have a school teacher who’s teaching. A guy — he’s out in the West — this guy from New England wants to kill him and find him. So he comes into the school with his gun to shoot the teacher, he decides not to shoot the teacher because all the kids pull their guns out and point it at him and say, ‘You kill the teacher, you die.’ He says, ‘Okay.’ The teacher lives. Real simple stuff. Saved the life of — there was no shooting because all the kids — we’re talking in elementary school — all the kids pull their guns out and says, ‘We like our teacher. You shoot our teacher, we’ll kill you.

In a Feb. 21 piece published at his Wallbuilders website, Barton admits that he got this story from L’Amour, but he argues that L’Amour claimed it was a true story.  He writes:

The account comes from noted western historian, Louis L’Amour, one of the most famous writers of both historical western fiction and non-fiction. L’Amour amassed a personal library of 17,000 rare books/diaries/journals/documents particularly focusing on the American west, including numerous handwritten journals of frontier pioneers and settlers. Additionally, he personally interviewed many personalities who had lived in the waning days of the Old West, including gunfighters, cowboys, lawmen, outlaws, and many others. For his outstanding body of work across his lifetime, he received the Congressional Gold Medal and then the Medal of Freedom from President Ronald Reagan.

Later in life, L’Amour recorded a number of interviews, relating interesting practices and incidents he had found in his research. In one such interview, he related the specific real-life account that David cited – a story that he also included in one of his historical novels (he regularly included numerous true stories and anecdotes from the Old West in his stories). So not only did David not make up the anecdote, it actually came from one of America’s most celebrated western historians, who personally attested to its authenticity.

First off, I find it rather appalling that Barton would celebrate a story in which kids in school are armed with guns.

Second, Barton is now using sources from novelists to make his historical points.  My 102-year old grandfather has read everything L’Amour has written and is fully aware of the fact that he is reading fiction.  Barton is relying on a second-hand account of a story from an author famous for writing fiction. Why didn’t he mention this in his conversation with Beck? If he did, it would have certainly raised red flags.  Instead he tried to pass this story off as something that was a legitimate part of the historical record.  This is something that can happen when your approach to the past is motivated by contemporary political concerns.

But even if the story was true, by relying on L’Amour’s telling of the story instead of a first-hand account of the 1850s event, Barton violates one of his fundamental convictions about how to use historical sources.  Over the years he has chided many historians, including me, for citing secondary sources instead of primary sources and basing historical arguments on second-hand accounts of events rather than on eyewitness accounts of the event itself.

As Warren Throckmorton notes, there are many people, most notoriously Mason Locke Weems, who said that George Washington chopped down the cherry tree, but that does not make the story true.

Yet another reason why Christians should not trust David Barton.