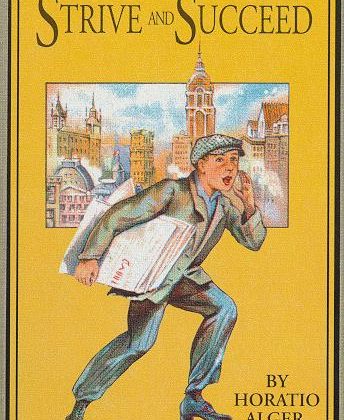 But, according to Credit Fix, all of this changed in the Gilded Age when Americans began to think of the American dream “not as competency but rather as the accumulation of great wealth.” The change had a lot to do with the books of Horatio Alger and the social theory of William Graham Sumner.

Speaking in New Haven in 1860, Abraham Lincoln told an audience, “I am not ashamed to confess that 25 years ago I was a hired laborer, mauling rails, at work on a flat-boat—just what might happen to any poor man’s son.” After his death, Lincoln’s personal trajectory from log cabin to White House emerged as the ideal American symbol. Anything was possible for those who strived.

Not only was great wealth an aberration in Lincoln’s time, but even the idea that the accumulation of great riches was the point of a working life seemed foreign. Whereas today the most well-off frequently argue that riches are the reward of hard work, in the Civil War era, the reward was a “competency,” what the late historian Alan Dawley described as the ability to support a family and have enough in reserve to sustain it through hard times at an accustomed level of prosperity. When, through effort or luck, a person amassed not only a competency but enough to support himself and his family for his lifetime, he very often retired. Philip Scranton, an industrial historian, writes of one representative case: Charles Schofield, a successful textile manufacturer in Philadelphia who, in 1863, sold his interest in his firm for $40,000 and “retired with a competency.” Schofield, who was all of 29 years old, considered himself “opulent enough.” The idea of having enough frequently trumped the ambition for endless accumulation.

As the men and women of Lincoln’s and Schofield’s generations aged, they retained the ideal of progress from poverty to competency. Later in the century, midwestern publishers created county histories that featured images of their subscribers’ homesteading progress, from “first home in the woods” to comfortable farm. The “mug books”—so called because they included images not only of cabins and farms but also of their owners—captured the trajectory of these American lives and the achievement of their economic ambitions: the creation of prosperous homes. They built them, but they could build them because they were citizens of a democratic republic. The opportunity to build secure homes was part of the purpose of the economy

For a moment at the end of the Civil War, it seemed the liberal ideal of a republican citizenry, in which autonomous individuals build a society based on contracts, would reach fruition in a United States where extremes of wealth and poverty were largely nonexistent. Instead, by 1900, extremes of the sort that hadn’t been seen since the abolition of slavery were de rigueur. In 1860 there was only one Cornelius Vanderbilt, but 40 years later, the concentration of wealth in the corporate form ensured an enlarged class of the super-rich.