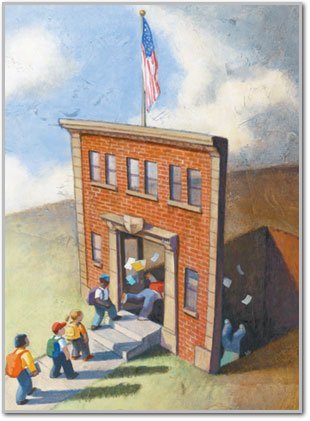 Kenneth Bernstein is a retired high school government teacher.  He has spent most of his career teaching AP courses at Eleanor Roosevelt High School in Greenbelt, MD.  He was the 2010 Washington Post Agnes Meyer Outstanding Teacher.

In a revealing piece at The Washington Post (originally published in Academe) entitled “A Warning to College Profs From a High School Teacher,” Bernstein describes how No Child Left Behind and Advanced Placement courses have made students unprepared for college.  He writes: “Please do not blame those of us in public schools for how unprepared for higher education the students arriving at your institutions are.  We have very little say in what is happening to public education.”

Here is more of his piece:

My primary course as a teacher was government, and for the last seven years that included three or four (out of six) sections of Advanced Placement (AP) U.S. Government and Politics. My students, mostly tenth graders, were quite bright, but already I was seeing the impact of federal education policy on their learning and skills.

In many cases, students would arrive in our high school without having had meaningful social studies instruction, because even in states that tested social studies or science, the tests did not count for “adequate yearly progress” under No Child Left Behind. With test scores serving as the primary if not the sole measure of student performance and, increasingly, teacher evaluation, anything not being tested was given short shrift.

Further, most of the tests being used consist primarily or solely of multiple-choice items, which are cheaper to develop, administer, and score than are tests that include constructed responses such as essays. Even when a state has tests that include writing, the level of writing required for such tests often does not demand that higher-level thinking be demonstrated, nor does it require proper grammar, usage, syntax, and structure. Thus, students arriving in our high school lacked experience and knowledge about how to do the kinds of writing that are expected at higher levels of education.

Recognizing this, those of us in public schools do what we can to work on those higher-order skills, but we are limited. Remember, high schools also have tests—No Child Left Behind and its progeny (such as Race to the Top) require testing at least once in high school in reading and math. In Maryland, where I taught, those tests were the state’s High School Assessments in tenth-grade English and algebra (which some of our more gifted pupils had taken as early as eighth grade). High schools are also forced to focus on preparing students for tests, and that leads to a narrowing of what we can accomplish in our classrooms.

I mentioned that at least half my students were in AP classes. The explosive growth of these classes, driven in part by high school rankings like the yearly Challenge Index created by Jay Mathews of The Washington Post, is also responsible for some of the problems you will encounter with students entering your institutions. The College Board did recognize that not everything being labeled as AP met the standards of a college-level course, so it required teachers to submit syllabi for approval to ensure a minimal degree of rigor, at least on paper. But many of the courses still focus on the AP exam, and that focus can be as detrimental to learning as the kinds of tests imposed under No Child Left Behind.