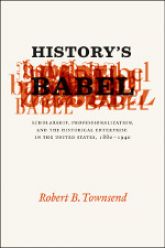 One of the books I hope to read this year is Robert Townsend’s History’s Babel: Scholarship, Professionalization, and the Historical Enterprise in the United States, 1880-1940 (University of Chicago Press).  For those of you who are unfamiliar with Townsend, he is the deputy director of the American Historical Association.  He is also the guy who writes all of those reports on the state of the profession and the history job market.

Over at Inside Higher Ed, Serena Golden asks Townsend a few questions about his new book.  Here is a taste of that interview:

Q: What does it mean to say that “[f]ollowing World War II, the historical enterprise was irrevocably broken”? What was the cause, and what were the results?

A: In the late 19th and early 20th century, leaders of the discipline engaged quite broadly with the various activities of history, taking a direct part in the development of professional and content standards for the schools and the gathering of historical materials. At the same time, high school teachers, leaders of historical societies, and librarians could all rise to prominent positions within the AHA. By the 1940s, however, the various spheres of historical activity had broken off into separate spheres, each with their own distinct professional structures and idioms, leaving the AHA as the province of self-defined “research men.”

The net result is not entirely negative, as the professionalization of most aspects of history led to significant improvements in the way history is taught and historical records are maintained and made available to the public. Nevertheless, the differences often generate friction across the various areas of history work when we could potentially work collaboratively. As a result, the academics are often viewed as an object of scorn for many who perceive themselves as excluded, and academics find they have little standing to intervene in questions that closely affect the public’s window into the discipline, such as teaching of history at the K-12 level and the presentation of history in a variety of cultural institutions.

Q: “It is too late to try to reconstruct a historical enterprise, but there is still time to bring the sundered pieces back together in more active conversation and collaboration with each other.” What might that entail?

A: The book developed out of an effort to explain why and how the professional divisions built up over many decades, which can make it so difficult to come together in a spirit of mutual understanding and respect to address growing challenges to our role in public life and the financial resources necessary for that work. While those in the academic wing of the history discipline can bring substantial content knowledge to the table, they often seem to forget that their potential collaborators bring a significant amount of training and wisdom about their areas of work. As a result, I’ve been involved in a number of projects that foundered on the academics’ failure to appreciate others professional expertise, and a purist view of the way knowledge about their subject should be shaped and delivered. When these sorts of projects work well, the academics and other history professionals work with a clear understanding about the limits of our respective areas of expertise, and a willingness to work through differences about the way a particular piece of historical information may need to be organized or even simplified for different constituencies and audiences. To try to open a better foundation for that kind of discussion, I tried to show how the refinement of particular areas of expertise benefited the discipline, but also made it increasingly difficult to speak across professional lines.