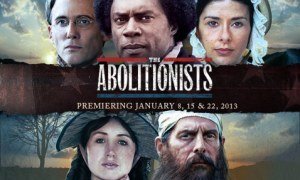 A couple of days ago I did a post at The Anxious Bench on the new PBS three-part series on abolitionism.  It focuses on the lives of five prominent nineteenth-century opponents of slavery: Frederick Douglass, Angelina Grimke, John Brown, William Lloyd Garrison, and Harriett Beecher Stowe.

Over at The Junto, Jonathan Wilson and Ken Owen (with whom I had an invigorating conversation this weekend in New Orleans about the American Revolution in Pennsylvania) review the series.

They are not very impressed.

Here is a taste of Wilson’s analysis:

So Part I of The Abolitionists leaves a lot to be desired. But I’m still thinking of using it in my course. Mostly, a good teacher should be able to fill in the gaps. Taken as the story of certain abolitionists rather than “the” abolitionists, this part of the film leads in some promising directions. It just doesn’t go there itself. I found the dramatizations effective; I think they will make it much easier for students to visualize life in the second quarter of the nineteenth century. (Tim Cragg’s cinematography is downright pretty.) And I consider that to be one of the most important — and difficult — things to get right in a history classroom.

And here is a taste of Owen’s analysis:

While the abolitionists are brought strikingly to life, 19th century society seems strangely flat. In contrast to Jonathan, I was disappointed by the portrayal of religion. The beliefs of all the key participants were mentioned, but (brief cameos from Stauffer and Gilpin aside) seemed to be skated over quickly, rather than explained in greater detail (positioning this within a wider movement of religious revival would have been helpful). The ideology of paternalism, in all its hypocrisies, was never adequately explained. Perhaps this highlights the biggest difficulty in portraying slavery to a modern audience. The complicated story to us today isn’t why Garrison, Grimke, Brown and Douglass despised slavery and campaigned so vigorously against it – it is why so many other people remained complicit with the slave system. Hopefully the next installments will go some way to creating a more vivid and dynamic world in which the institution of slavery became more strongly challenged.

In addition to these thoughtful reviews, this post also includes links to seven other reviews of the documentary. Check them out.