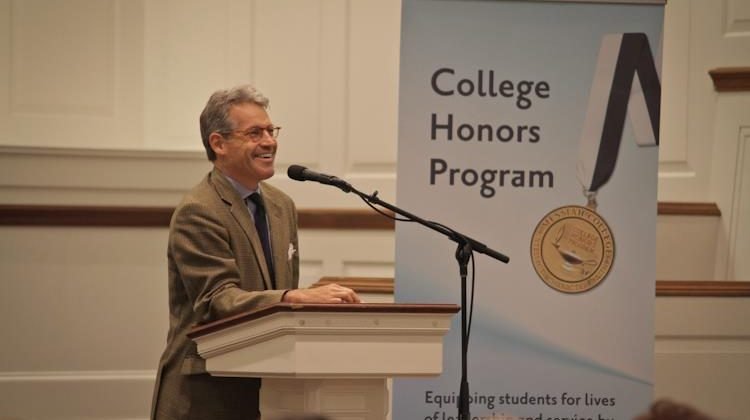 Last night at Messiah College I heard Christian writer Eric Metaxas give a very entertaining, humorous, and inspiring lecture on the life of Dietrich Bonhoeffer.  The lecture was based on his wildly successful book, Bonhoeffer: Pastor, Martyr, Prophet, Spy.  Since I received several e-mails and Facebook messages from readers about Messiah’s decision to host Metaxas, I thought I would write a post on his talk.  I also think it would be very instructive to think about his lecture in the wake of Annette Gordon-Reed’s American Democracy Lecture from the evening before. The juxtaposition of these two lectures made for a very engaging conversation today in my Historical Methods course.

Eric Metaxas is an evangelical writer and preacher.  He employs the past–in this case the heroic story of Bonhoeffer’s resistance to Adolph Hitler–to inspire the faithful to live better, more Christian, lives.

I do not have a problem with this, as long as Metaxas does not try to claim the title “historian.” (And I don’t think he has ever claimed to be a historian, although I do get concerned when I see him doing events with culture warriors and Christian nationalists like David Barton).  The past can be useful in our lives as a source of inspiration.  I don’t know how anyone cannot be inspired by Bonhoeffer’s story.  Frankly, Metaxas inspired me tonight to live a better Christian life.  It was a great sermon.  I am glad that he came to Messiah College.

But after listening to Metaxas, and learning more about the book’s reception from people who know a thing or two about Bonhoeffer, I have a hard time separating my identity as a historian from my identity as a Christian.  As some of the readers of The Way of Improvement Leads Home reminded me via e-mail this week, Metaxas’s book has been roundly criticized by Bonhoeffer scholars for its attempt to paint the 20th-century German theologian as an evangelical Christian.

One of the harshest critics of the book has been Clifford Green, the executive director of Dietrich Bonhoeffer’s works.  Back in 2010 he wrote a review of the book entitled “Hijacking Bonhoeffer.”  Another Bonhoeffer scholar, Victoria J. Barnett, called it a “badly flawed book” for many of the same reasons as Green.

The hits kept coming. Richard Weikart, an evangelical scholar at Cal-State Stanislaus, said that Metaxas “does not have sufficient grounding in history, theology, and philosophy to interpret Bonhoeffer.”  Nancy Lukens, translator of Bonhoeffer’s works, called it an “Agenda-Driven Biography.”  Alan Wolfe, writing at The New Republic, seemed to like the book, but he is hardly a Bonhoeffer scholar.  Jason Hood summarizes many of these reviews at Christianity Today.  Finally, I heard Charles Marsh of the University of Virginia criticize the book at a lecture last year at Samford University.  Marsh, I might add, has a biography of Bonhoeffer appearing soon with Knopf.

I am not a Bonhoeffer scholar so I tread lightly, but when I see major Bonhoeffer scholars–both liberal Protestants, evangelicals, and others– being so critical of this book, it raises red flags.  So, assuming the book is flawed, I am trying to figure out why I was inspired tonight by Metaxas’s lecture.  Or to put it differently, can one still be inspired by a presentation about the life of a historical figure even when the presentation may be based on a skewed interpretation of that person’s life? Does my inspiration rest on a shaky foundation?

I think Bonhoeffer’s story–his courage and conviction–is always inspirational.  Bonhoeffer doesn’t have to be an evangelical Christian to be inspirational.  If he was a liberal Protestant I would still be inspired by him.  If Metaxas wanted to use Bonhoeffer to call the faithful to follow God in difficult times, I think he could have done that without trying to make him into something he was not.  He is a great writer and communicator.  He could have easily made it work.

Metaxas’s use of the past was strikingly different from the way Annette Gordon-Reed interpreted the Thomas Jefferson-Sally Hemings affair the evening before. Gordon-Reed did not use the past to preach. (Later I learned that some folks in the audience were disappointed that she did not). While it certainly would have been easy to use the Jefferson-Hemings case to speak prophetically against the evils of slavery and the sexual behavior of Jefferson, Gordon-Reed made it clear that this was not the job of the historian.  (She reiterated this more strongly in a breakfast with students on Wednesday morning). On this point, I would highly recommend an article by my colleague Jim LaGrand entitled “The Problems of Preaching Through History.”

While Gordon-Reed’s talk certainly raised a host of moral questions, and could not help but trigger the moral imagination of the people in the audience, she did not use the Jefferson-Hemings affair as a sermon illustration to inspire us (in the case of Sally Hemings) to be strong in the midst of difficult times.  She did not use her lecture to openly rail against the practices of white slaveholders like Jefferson.  It would have been easy for her to do this, but she did not. Whatever moral lessons one learned about the past were only gleaned through a thorough understanding of the topic rooted in careful and nuanced historical research.  I can’t help but think that her moral critique was richer and deeper as a result.

This week at Messiah College we witnessed, on consecutive nights before very large crowds, two ways of using the past.  Metaxas should not be criticized for using the past to preach–that’s what he does. In fact, I have done this on occasion as well. The past is always useful. Whatever criticism we cast on Metaxas should focus on his apparently skewed portrayal of Bonhoeffer.  If you are going to use the past to preach, at least make sure you get it right.  I would not be doing my job as a historian if I did not point this out.

As we discussed Metaxas’s lecture (and his corresponding chapel talk on William Wilberforce) in Historical Methods today, we found ourselves ambivalent about what to make of it.  On the one hand, we were glad to see so many people talking about a figure from the past and thinking about how the past might have implications for their lives in the present.  On the other hand, we wondered if the people in Hostetter Chapel last night, or the people who have bought or read Metaxas’s book, left the lecture with an accurate portray of the man.

I think the lecture opened the door to a conversation–in the dorms, at the seminar table, in the hallways, and on this blog–about the uses of the past. (Students were calling up reviews of the book on their laptops and referencing them during our discussion today.  It was great!).  Without the lecture, people on campus would not be talking about history today.

Gordon-Reed enters the past as a historian with the goal of understanding it. She is not primarily interested in preaching or political activism.  She may not have been as funny or inspirational as Metaxas (although most people who heard her talk thought it was excellent), but she has a very different vocation–the vocation of historian.

As historians Roy Rosenzweig and David Thelen have argued, the past is all around us.  We are constantly feeling its “presence” in our lives.