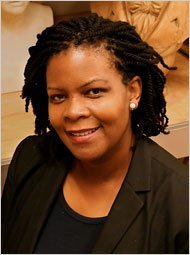 It was a big night in American politics last night, but it was also a big night for American history at Messiah College.  Over three hundred people–including many history alumni, students, and community members– packed the Hostetter Chapel on campus to hear Pulitzer-Prize winning historian Annette Gordon-Reed talk about her work on Thomas Jefferson and Sally Hemings. Not bad for an election night!

Gordon-Reed, speaking in an engaging style with no notes, told the fascinating story of her work on the Hemings family.  Her talk drew from material from both her 1997 book Thomas Jefferson and Sally Hemings: An American Controversy and her award-winning The Hemingses of Monticello: An American Family.  During the Q&A session, Gordon-Reed fielded questions about religion and the Hemings family, Henry Wiencek’s new book on Jefferson and slavery, and the emotional power of the Sally Hemings story.

As I noted above, it was a great night for history and humanities at Messiah College.  Thanks to Annette Gordon-Reed for coming to Grantham to deliver the 2012 American Democracy Lecture.  I also want to thank Jean Corey and Tina Keul of the Messiah College Center for Public Humanities for co-sponsoring the event and Messiah president Kim Phipps for hosting a post-lecture reception.