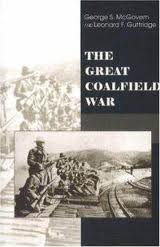 Like Jonathan Rees, one of my first political memories centers around McGovern’s 1972 bid for the presidency.  My first or second grade teacher had mentioned that Richard Nixon had failed to end the war in Vietnam.  As a six-year-old I thought that this was a horrible thing and became convinced that I needed to encourage people to vote for McGovern.

I remember telling my grandfather (still alive today at the age of 102), a lifelong Democrat, that if I were old enough I would vote for McGovern.  I will never forget the big affirming smile that came across his face as we sat in the living room of his house in Parisppany, New Jersey.

As I read the obituaries and blog posts about McGovern’s death and legacy, I am reminded that he was both a Christian and a historian.

McGovern was the son of a Wesleyan Methodist pastor in South Dakota who had ties to evangelical Houghton College in upstate New York.  It seems that George’s liberal politics was informed by his Christian faith, especially the Social Gospel.  He attended the Methodist Garrett Theological Seminary and served several churches as a visiting supply minister.  (Check out Chris Gehrz’s post at the Pietist Schoolman). 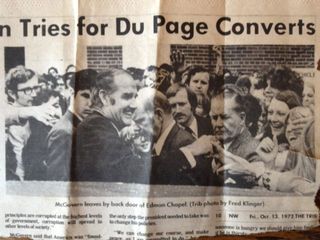 In the last weeks of the 1972 campaign, McGovern began to talk openly about his Christian faith.  This was particularly the case at a campaign stop at evangelical Wheaton College where he invoked John Winthrop’s 1620 “City on a Hill” sermon (“A Model of Christian Charity”).  We need to know more about the relationship between faith and politics in McGovern’s life.

In his recent post at the blog of The Historical Society, Rees reminded me that McGovern was also a historian.  After receiving an M.A. in history at Northwestern, McGovern returned to his alma mater, Dakota Wesleyan University, to teach history and political science.  He eventually got his Ph.D from Northwestern (he studied at Northwestern under Arthur Link, another Christian historian) in 1953. He wrote a dissertation on the Colorado Coal Strike of 1913-1914.  The dissertation was eventually published as The Great Coalfield War.

Here is a taste of Rees’s excellent and informative post:

In 2004, my department, along with the Bessemer Historical Society—the people who are working to save the archives of the Colorado Fuel and Iron Company, the largest firm that employed those strikers—invited McGovern to campus for a fundraiser.  He not only accepted, he cut his usual speaking fee by two thirds.

Me and a colleague from the Political Science department picked McGovern up at the airport.  Then we drove him to Peterson Air Force Base so that he could pick up his granddaughter.  Then he took us all to lunch at the Broadmoor Hotel in Colorado Springs (famous, among other reasons, for being the place where George W. Bush decided to give up drinking).  That remains the only time that I have ever eaten at the Broadmoor.  Then we dropped off his granddaughter back at the base and drove to Pueblo.

We all chatted almost the entire time.  Of course, the same way that Elton John will have to sing “Crocodile Rock” well past his dotage, McGovern talked about the 1972 election.  His lines were interesting. (They included, “I would rather be me right now than Richard Nixon.” and “Nixon was incredibly intelligent, but completely amoral.”)  I could tell these lines were also very well rehearsed.

When the conversation turned to history, however, McGovern’s eyes lit up.  He began to talk about Arthur Link, and how he had suggested the Colorado topic because, “There’s this huge strike that happened and nobody’s covered it before.”  He talked about doing research in Colorado during the early 1950s, and how he went to the movies in Denver once and the entire audience (but him) booed a newsreel when they saw Mother Jones.  We talked about Consensus History and the New Social History.  I think he liked talking about Colorado History with me and at our fundraiser because nobody asked him to do so very often.

It would be a shame if the historical profession makes the same mistake in the wake of his passing.  After all, George McGovern was a historian before he was ever a politician.