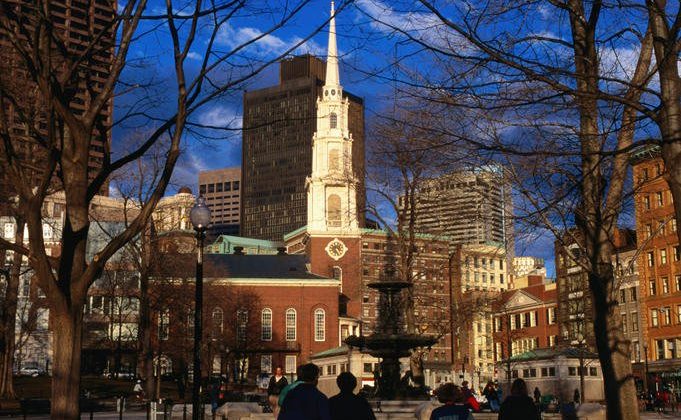 Heather Curtis, a professor of religion at Tufts University, takes us on a walk along the famous Freedom Trail and argues that this two and a half mile stretch of Boston history has a lot to teach us about America’s religious past.  Her particular focus is on the evangelical Park Street Church, a congregation that was the hub of 20th century New England evangelicalism.  Here is a taste of her piece at Religion & Politics:

What befuddles many of my Tufts students about Park Street Church is not that nineteenth-century congregants sought to “Christianize” American civic and political culture (this seems a relatively familiar concept for a generation that has been exposed to the rhetoric of what they call the “Christian right”). Rather, these students are surprised to discover that this “evangelical landmark” actually succeeded in making what Rosell calls “an enduring impact” on both the moral life of the city and the country. Certainly Park Street’s influence over city and state politics has fluctuated over its two hundred year history, as revivalist evangelicalism lost ground to more liberal forms of Protestantism, and also to the Roman Catholicism that nineteenth- and early twentieth-century immigrants brought to Massachusetts. Yet, in the twentieth century Park Street retained its place as Boston’s preeminent evangelical institution, even as Catholics increasingly dominated city and state politics, and as the Commonwealth developed its reputation as a liberal stronghold. Park Street’s staff members proudly boast that when Billy Graham first came to Boston in December of 1949, he held his opening revival meeting in the church’s sanctuary. Graham preached his final sermon of the crusade—“Shall God Reign in New England?”—from the exact spot on the Boston Common where George Whitefield had proclaimed his evangelistic message more than two centuries earlier. Echoing Puritan and revivalist jeremiads, Graham declared that the “destiny of America” was at stake, and insisted that only widespread repentance of sin could ensure “Peace in Our Time.”