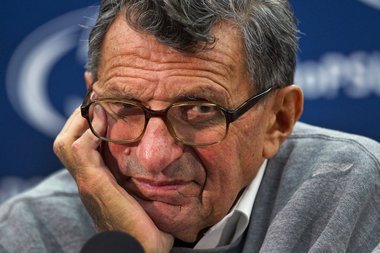 Joe Paterno won 409 games as a head football coach.  That is a historical fact that cannot be erased.  Yet in doling out sanctions to Penn State, the NCAA has made an attempt to erase the past.  According to Northwestern sociology professor Gary Alan Fine, this was a move of Orwellian proportions.  Here is a taste of his piece at The New York Times:

The more significant question is whether rewriting history is the proper answer. And while this is not the first time that game outcomes have been vacated, changing 14 seasons of football history is a unique and disquieting response. We learn bad things about people all the time, but should we change our history? Should we, like Orwell’s totalitarian Oceania, have a Ministry of Truth that has the authority to scrub the past? Should our newspapers have to change their back files? And how far should we go? Should we review Babe Ruth’s records? Or O. J. Simpson’s? Should a disgraced senator have her votes vacated? Perhaps we should claim that Joe McCarthy actually lost his elections. Or give victory to John Edwards’s opponent?
Several years ago, my school, Northwestern University, had a small scandal in which a star football player pleaded guilty to committing perjury in a trial that involved betting on the school’s games. Surely it was a bad thing, and one that deserved condemnation. Our athletic director suggested that the player’s records be erased from the school’s record books. I was teaching a course on scandals at the time, and the class and I wrote to our president arguing that erasure was not the answer. Added information was. We were gratified that our president wisely agreed, and our history was not blemished.
It is understandable that an organization would want its official history to reflect its hopes and desires. But our histories must properly reflect what happened at the time and not in our imaginations. Those young men at Penn State deserve the recognition for their efforts, as does Mr. Paterno, who died in January, as a stellar football strategist. We have learned over the past decades that societies are quite able to remember painful moments with sensitivity. This is evident in the memorials to the victims of Nazism throughout Germany and our memorials to slavery or internment. The memorial to the shooting victims at Kent State is a recognition in stone and grass that horror can be recalled on campus.