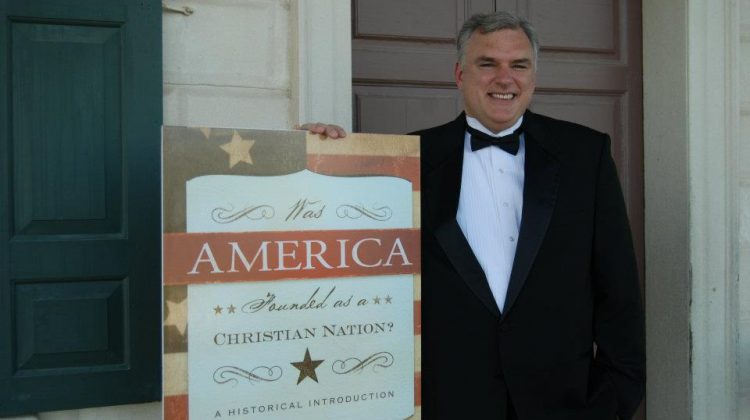 I took the tuxedo back to the store yesterday morning.  I returned the 2013 rental vehicle (huzzah for free upgrades!).  And I am now once again sitting in my study in our small split-level home in Mechanicsburg, Pennsylvania.  This is a far cry from the place where we were, and the company we were keeping, on Monday night.  But I am glad to be back in the saddle.

On Monday night, as many of you know, I was privileged to be one of the honored guests at the George Washington Book Prize dinner at Mount Vernon.  My book Was America Founded as a Christian Nation: A Historical Introduction was chosen as one of the three finalists for the award.

The winner of the GW Book Prize, and the recipient of the 50,000 check, was Maya Jasanoff of Harvard University.  Maya’s book Liberty’s Exile: American Loyalists in the Revolutionary World is outstanding.  Her award is well-deserved. During her acceptance speech she said that she was thankful that the United States was the kind of country where the author of a book about Loyalists could be honored with a prize that is named after George Washington.  It was an amazing lecture.  I hope it shows up on the web sometime soon.

My wife and I got the opportunity to spend the day on the grounds of Mount Vernon. We were given a day room in the guest quarters and were provided with full access to the grounds. We were even invited to climb up to the mansion’s cupola and look out over the Potomac on what proved to be a beautiful evening.

We also spent some time with Jana Riess, the editor at Westminster/John Knox who acquired my book and brought it to fruition.  We had lunch in the Mount Vernon Inn and took a tour of the grounds that focused on the slave experience at the plantation.  I was so glad that Jana drove out from Cincinnati to join us for this event.

I also got to meet Mary Thompson, a research librarian at Mount Vernon and the author of In the Hands of Good Providence: Religion in the Life of George Washington.  Mary was kind enough to write a blurb for the back cover of Was American Founded as a Christian Nation.

During the reception on the mansion lawn I met Supreme Court Justice Samuel Alito.  We chatted about our mutual love of revolutionary-era American history and he informed me that a Messiah College graduate was going to be clerking for him in the near future.  He said that he was looking forward to reading my book!

After the reception, a marching-band led us to dinner in the Ford Orientation Center.  I sat next to Sheila Coates, president of Black Women United for Action.  Sheila and her organization have been very influential in the building of the Mount Vernon Slave Memorial.  I really hope Sheila finishes her book about growing up in the 1950s on an integrated street in Leesburg, Virginia.

We were joined at the table by the 2005 American history teacher of the year from the District of Columbia, a family who descended from one of Washington’s slaves, and Andy Morse, Mt. Vernon’s Director of Development.

I also met Jim Basker and Leslie Herrmann, president and executive director respectively, of the Gilder-Lehrman Institute of American History.  I do a lot of work for Gilder-Lehrman, so it was great to put names with faces.

The evening ended with a series of toasts (including the requisite “huzzahs”) for Maya Jasanoff, retiring Mount Vernon CEO Jim Rees, and, of course, George Washington.

Thanks to Washington College (and especially Adam Goodheart and his staff at the C.V. Starr Center for the American Experience), the Gilder-Lehrman Institute of American History, and Mount Vernon for sponsoring the George Washington Book Prize.  Rick Beeman of the University of Pennsylvania headed the selection committee that chose the three finalists. The staff at Mount Vernon–from Sean on the police force to Andy Morse (and everyone in between)– made us feel more than welcome during our visit.

I have posted some additional pictures of the event at my Facebook page if anyone is interested.