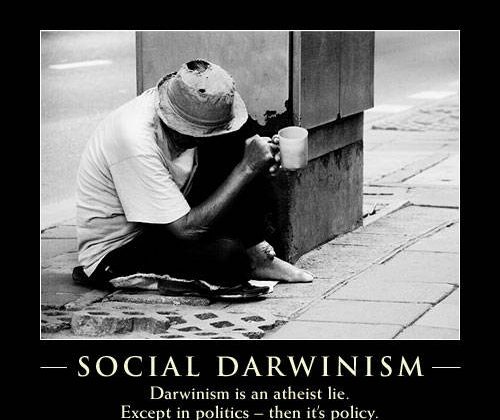 Can a Christian believe in Social Darwinism?  Roger Olsen, a theology professor at Baylor University’s George W. Truett Theological Seminary, does not think so.  He wonders why conservative Christians seem to warmly embrace free-market principles driven by Social Darwinism but, at the same time, oppose biological Darwinism.  Here is a taste of his piece at Patheos:

A good example of this contrast and even contradiction appears in today’s local newspaper–owned and operated by a Christian family who, when they bought the paper, immediately put “In God We Trust” immediately beneath the paper’s name on page one. Numerous letters to the editor applauded that.

Today’s edition contains an unsigned editorial (which always reflect the editorial board’s opinion) defending “free-market” economics: “Americans should allow Darwinian, free-market dynamics to continue in the ebb and flow that so characterize this [capitalist] system.” (Waco Tribune-Herald, May 16, 2012, 6A)
I have written a letter to the editor simply asking how this affirmation of social Darwinism is consistent with “In God We Trust.”

What I really wonder is how so many even educated Christians fail to see the contradiction inherent in belief in the Christian God, the God of Jesus Christ, together with belief in Social Darwinism. Surely “In God We Trust” (in this newspaper) does not mean “In the God of Deism” we trust. Or at least that is not what most readers who applauded the motto’s inclusion thought it meant.

I am willing to bet that I am only one of a tiny number of readers who will notice this contradiction. I am willing to bet that IF the newspaper published an editorial including an affirmation of biological Darwinism there would be a huge outcry and many subscribers would drop their subscriptions. I doubt there will be even a ripple of dissent in this case.