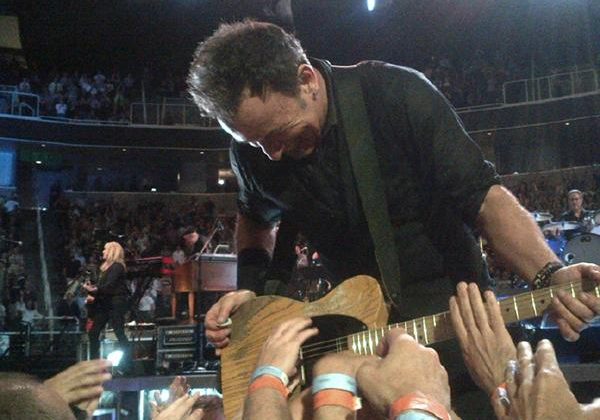 Joan Walsh offers us a view from the “pit” on Springsteen’s recent stop in San Jose.  Her piece in Salon is a thoughtful reflection on the role that death has played in this Springsteen tour–from Clarence and Danny to Springsteen’s Catholicism and references to “Calvary.”  Here is a taste:

The “Wrecking Ball” tour is also making me more conscious of Springsteen’s Catholic upbringing (which was maybe more overtly on display in “Devils and Dust.”) In the haunting gospel “Rocky Ground,” he’s the shepherd who needs his flock. “We are Alive,” a song told from the point of view of the dead in their graves who declare that their “spirits rise,” opens with a reference to “Calvary Hill,” which is one of the album’s two references to Calvary, where Jesus died. The other reference is sort of controversial. In his searing “We Take Care of Our Own,” an indictment of all the ways we actually don’t do that in this country, he rails against our indifference to the struggles of the poor, “from the shotgun shack to the Superdome,” continuing

Springsteen fan boards immediately lit up about the “mistake” – he would seem to have meant “cavalry,” the soldiers who charge in on horseback to save the day, often at the cry of a bugle – but I recognized his Catholic school education, in which you learn the excruciating physical details of Jesus’s suffering and death at Calvary before you learn about divisions of the military, and you confuse the two words for the rest of your life. Two other recent “Calvary-cavalry” mix-ups come from two other Catholics, Bill O’Reilly, who confused the two when reading his Lincoln audiobook, and Conan O’Brien, who reportedly mixed them up in a comic-dramatic rendition of “War Horse.” Even though the song’s official lyrics were later corrected to “cavalry,” he sang “Calvary” again Tuesday night, another deeply Catholic reflex that provided a clue to why his rituals of grief and redemption are so physical.

I have my tickets–September 2 at Citizens Bank Park in Philadelphia.