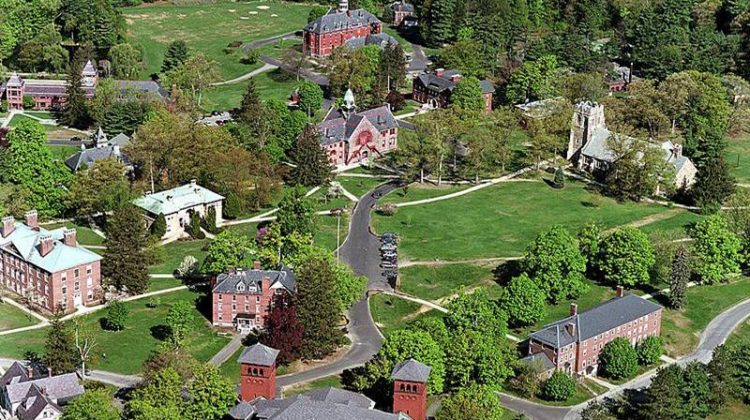 The owners of the former Northfield Mount Hermon prep school campus in Northfield, Massachusetts want to give their campus away to a Christian institution that can use it.   The Green family from Oklahoma, who also happens to own the craft store chain Hobby Lobby, has hired Indiana Wesleyan University administrator Jerry Pattengale to handle the sale.

I have never been on the 217-acre Northfield campus, but since it is a historic New England boarding school I am imagining it is pretty nice.  (Just look at the picture I posted).

One of the institutions in the running for the campus is Liberty University.  The folks at Jerry Falwell’s school want to make it into a northeast extension campus.  The prospect of Liberty taking over the Northfield campus has triggered protests from Northfield Mount Hermon alumni who believe that Liberty is too conservative and thus not representative of the more inclusive evangelicalism of the school’s founder, the late 19th-century revivalist Dwight L. Moody.

The New York Times has picked up the story.  Here is a taste:

…Other interested parties include Azusa Pacific University and Olivet University, both Christian colleges in California, as well as the Interdenominational Theological Center, a consortium of seminaries based in Atlanta. Olivet is a leading candidate, Mr. Pattengale said, because it wants to use the entire property as a Northeastern campus for its growing student body and has a partnership with the World Evangelical Association, an international network of evangelical churches and groups.
Andrew Lin, an Olivet trustee who visited Northfield last week, said the university had been searching for property in the Northeast but had seen “nothing as complete as this.” He said that he could not imagine the presence of Olivet causing “any sort of trouble” in town.
“They could find a lot of value in what we do,” Mr. Lin said. “We are turning around men and women to be contributors to this world.”
On Sunday, about two dozen Northfield residents held a meeting to discuss the Liberty University proposal. But Don Campbell, a resident who attended part of the meeting, said it turned into a broader discussion of the town’s hopes for the campus. Mr. Campbell said his own hope was that the new owners would not seek to “overwrite other people’s ways of thinking” with their particular set of religious beliefs but, rather, to build bridges.
“That kind of model has real opportunity in this valley — to engage with many people who have turned away from a faith practice as being meaningless,” he said….
It looks like the original plan for the campus, a Christian Great Books college dedicated to the legacy of C.S. Lewis, did not pan out.