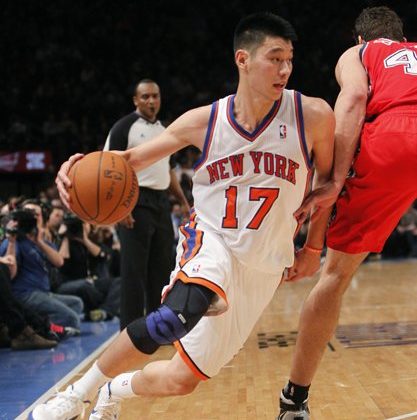 David Brooks has joined the chorus of pundits who are writing about the phenomenon that is Jeremy Lin.  He argues that the competitive and ambitious nature of professional sports is incompatible with the great Abrahamic religions.  Here is a taste:

We’ve become accustomed to the faith-driven athlete and coach, from Billy Sunday to Tim Tebow. But we shouldn’t forget how problematic this is. The moral ethos of sport is in tension with the moral ethos of faith, whether Jewish, Christian or Muslim.
The moral universe of modern sport is oriented around victory and supremacy. The sports hero tries to perform great deeds in order to win glory and fame. It doesn’t really matter whether he has good intentions. His job is to beat his opponents and avoid the oblivion that goes with defeat.
The modern sports hero is competitive and ambitious. (Let’s say he’s a man, though these traits apply to female athletes as well). He is theatrical. He puts himself on display.
He is assertive, proud and intimidating. He makes himself the center of attention when the game is on the line. His identity is built around his prowess. His achievement is measured by how much he can elicit the admiration of other people — the roar of the crowd and the respect of ESPN.
His primary virtue is courage — the ability to withstand pain, remain calm under pressure and rise from nowhere to topple the greats.
This is what we go to sporting events to see. This sporting ethos pervades modern life and shapes how we think about business, academic and political competition.
But there’s no use denying — though many do deny it — that this ethos violates the religious ethos on many levels. The religious ethos is about redemption, self-abnegation and surrender to God.

Brooks references a 2010 Lin interview with Tim Dalrymple at Patheos in which Lin acknowledged the tension that exists between faith and sports, between winning and playing “selflessly for God.”

I have no doubt that this column will get a lot of attention. If Brooks is right, what are the implications of his argument for Christian athletes and sports programs at schools that take their religious identity seriously?

As a high school and college athlete (basketball, lacrosse, tennis) and a Christian, Brooks’s article resonated with me.  How often do Christians talk about the tensions between faith and sports?  No one ever told me that sports might cultivate within me a prideful, ambitious, competitive spirit that could be incompatible with my Christianity. If anything, I was told that highly competitive sports was a venue for which I could strengthen my faith.  Yet I cannot ever recall dunking a basketball in a game (please remember, I am 6’8″) and thinking–“I just glorified God.”   I can, however, remember dunking a basketball in a game and thinking–“I am good, I am special, the crowd loves what I just did.”  The more I think about it, the more I must admit that whatever I have learned about the dangers of pride, ambition, and competitiveness did not come from my participation in sports.

Jeremy Lin is the anti-Tim Tebow. Rather than proclaiming a muscular evangelicalism that tries to baptize the pagan origins of professional sports with public prayer (on one knee) and Jesus talk, Lin is doing his best to think critically and thoughtfully about whether or not his deeply held faith commitments are compatible with what qualifies as success in professional basketball. What if Lin quit the NBA because he could not reconcile the two?  Now there’s a thought.