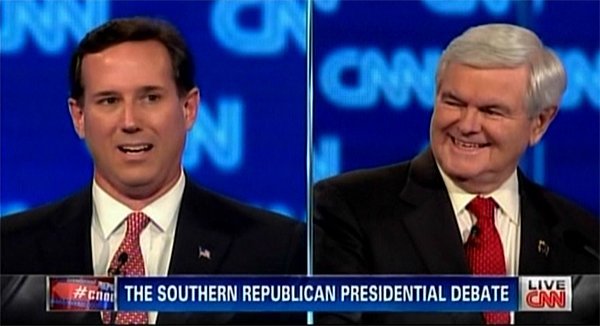 As you may know, Newt Gingrich and Rick Santorum have said some very harsh things on the campaign trail about “black people,” food stamps, and the best ways to deal with poverty.

40 Catholic leaders and theologians have written an open letter to the two Catholic GOP presidential candidates rebuking them for rhetoric that violates the teaching of the Church.  Here it is:

As Catholic leaders who recognize that the moral scandals of racism and poverty remain a blemish on the American soul, we challenge our fellow Catholics Newt Gingrich and Rick Santorum to stop perpetuating ugly racial stereotypes on the campaign trail. Mr. Gingrich has frequently attacked President Obama as a “food stamp president” and claimed that African Americans are content to collect welfare benefits rather than pursue employment. Campaigning in Iowa, Mr. Santorum remarked: “I don’t want to make black people’s lives better by giving them somebody else’s money.” Labeling our nation’s first African-American president with a title that evokes the past myth of “welfare queens” and inflaming other racist caricatures is irresponsible, immoral and unworthy of political leaders.

Some presidential candidates now courting “values voters” seem to have forgotten that defending human life and dignity does not stop with protecting the unborn. We remind Mr. Gingrich and Mr. Santorum that Catholic bishops describe racism as an “intrinsic evil” and consistently defend vital government programs such as food stamps and unemployment benefits that help struggling Americans. At a time when nearly 1 in 6 Americans live in poverty, charities and the free market alone can’t address the urgent needs of our most vulnerable neighbors. And while jobseekers outnumber job openings 4-to-1, suggesting that the unemployed would rather collect benefits than work is misleading and insulting.

As the South Carolina primary approaches, we urge Mr. Gingrich, Mr. Santorum and all presidential candidates to reject the politics of racial division, refrain from offensive rhetoric and unite behind an agenda that promotes racial and economic justice.

Here is my take on Gingrich’s commitment to the sanctity of human life.