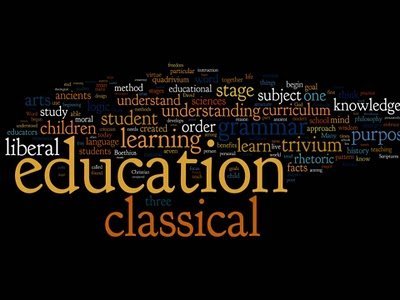 Christopher Perrin, a former headmaster at a classical school, reflects on the benefits of a classical liberal arts education. Here is a taste of his blog post:

Today (11/1/2011) on his radio program, Rush Limbaugh responded to a woman with a classical studies degree who was complaining (via a sign at a protest) that she could not get a job.  This led Limbaugh to suggest that perhaps she should not have taken a classical studies degree in the first place, wondering aloud why someone at her college didn’t tell her it was a worthless degree.  He then debunked the notion (apparently believed by too many college students) that a college degree of any sort guarantees a high-paying job.

Well.  As you might guess, I think think studying classical literature and language can be an excellent choice–but not necessarily because it automatically (in quid pro quo fashion) results in a high-paying job. In fact, what is lost in the whole debate is the question about what an education is ultimately for.  Is it for getting a good job?  Is for preparing us to be efficient workers in the American democracy?  Is it for enabling us to make a good deal of money?  Or is it primarily for shaping and cultivating our humanity?  Some have put the question this way: Is education primarily about making a living or learning how to live?

We Americans are quite pragmatic, and I admit that even as a classical educator and publisher I think a good deal about what practically should happen.  But the traditional, classical approach to education which has emphasized the cultivation of a human soul, nourished by the study of truth, goodness and beauty (not too American, eh?) has actually produced extremely practical, capable people.  We need only cite the likes of Thomas Jefferson, James Madison and John Adams to make our case.  These men could not have helped produce the American Republic had they not been steeped in “classical studies” and yes, even Latin.  When we read the Federalist Papers we find regular references to the history and governments of Greece and Rome and classical authors cited in Latin, without translation.  These men had cultivated souls.  They were classically educated.  They were eminently practical.

Today a classical education may not result in a quick hire as a web developer, project manager or accountant.  But study the people who have had a good classical education.  You will find them leading and serving others.  By analogy, study those who have studied English.  Yes, you will find some of them waiting on tables (along with some business majors), but you will also find that among fortune 500 companies it is not business but English which is the more common major among company CEOs.  It just may be the case that studying literature, language and humanity may just be a terrific preparation for creatively and wisely serving and leading…other humans…