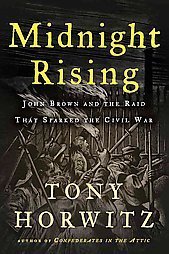 Over at The Wall Street Journal, David Reynolds, the author of a recent book on Harriett Beecher’s Stowe’s Uncle Tom’s Cabin, reviews Tony Horwitz’s new book on John Brown, Midnight Rising: John Brown and the Raid That Sparked the Civil War.  (Reynolds, I should add, is also the author of a book on Brown).  Here is a taste from the conclusion of the review:

…To emphasize what he calls the “manifest implausibility” of Brown’s scheme, Mr. Horwitz presents him as a maladroit leader with a fragmented following. Brown had “poor judgment of personnel,” Horwitz tell us—as though there was ample opportunity in the 1850s to sort through a field of candidates ready to join a dangerous mission in the South. Mr. Horwitz notes that Brown’s Northern supporters and his own soldiers often quarreled with him about battle plans—as though anyone in that decade could envisage a sure military strategy against the South. (Lincoln, for one, said in 1858 that war was not even an option against slavery.)

In “Midnight Rising,” Mr. Horwitz corrects a fact here and there, adds some human anecdotes and local history, and records such details as the degree to which the various hanged bodies quivered after the noose had done its work. But much of his book is a gloss of what is already known

As for the figure at the center of the story, Mr. Horwitz sees him too often as the grim Old Man of long-ago histories: bold, arrogant, sly, fanatical, murderous, muddle-headed and possibly insane. One has to think that, with their more admiring view, Emerson and Thoreau were closer to the truth.