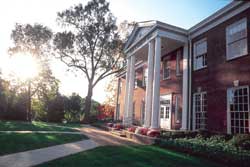 The Stony Brook School is a private Christian school that brings together the best of pre-collegiate academic rigor with a deep commitment to Christian faith.  Such a combination is rare for a Christian high school with evangelical roots, but the Stony Brook School (SBS), founded by evangelical leader Frank Gaebelein in 1922, has managed to pull it off.  The boarding and day students who have attended the school since its founding have gone on to attend some of the best colleges in the country.

Full disclosure:  My wife was the assistant dean of students and director of residential life at SBS from 1995-2000.  During that time we lived in a girls dorm on campus. I taught AP US History there during the 1999-2000 school year and a few years ago returned to deliver a Staley Lecture on the roots of American individualism.

It appears that many SBS alums are not satisfied with the direction that the headmaster and board of trustees are taking the school.  In the last few years several faculty have converted to Catholicism, leading the school administration to reaffirm the school’s Protestant evangelical roots.  There has also been an attempt to limit student leadership positions to boarding students, a policy that has alienated many bright young day students who live in the Stony Brook area and have chosen SBS over the local public school district.  In the last few years several key faculty and administrators have resigned their posts over these issues.

A group of alums are protesting these changes through a Facebook page called “Restore the Stony Brook School” and have written a petition expressing their concerns.  They are asking all concerned alumni to sign it.

Frankly, I am not privy to what is happening at SBS.  I have a few connections remaining at the school, but most of the educators who I knew have left the school to pursue their teaching vocations at other institutions.

For what it’s worth, here is the official statement of the “Restore the Stony Brook School” page:

After 90 years of existence, The Stony Brook School finds itself at an important crossroad.  In the last few years we have seen some of the bedrock that defines the School and its long held tenets shaken by the very leaders who were appointed to guard it.  The leadership of the School, the headmaster and the board of trustees, has failed the collective stakeholders––the alumni, faculty, students, parents, and friends of the School––by systematically setting out to change some of the most important aspects of what has made the School, in both theory and in practice, a Christ-centered educational community that has served and nurtured thousands of students over decades.

In short, The Stony Brook School has been reshaped by a headmaster whose religious convictions clash with the intent of the School’s Founders, and whose agenda has been upheld by an ineffectual and passive board who are at best ignorant, and at worst complicit, with the deception.  The policies and changes in philosophy––both attempted and enacted––reflect an attempt by the current leaders to reshape the School to reflect their own personal ideologies. The most grievous of these is the replacement of non-denominational openness with an exclusionary religious fundamentalism that promotes divisiveness and sectarianism.  This has all been carried out behind a veil of doctrinal justification and has been purposefully hidden from the larger School community.

The charge of the headmaster and the board of trustees is to hold true to the School’s founding principles, to ensure that faculty and administrators are held to the highest standards of excellence, and to guide the School to long-term financial and reputational health.  Unfortunately, our current leaders have failed in these endeavors.

The policy changes recently pursued by the School’s leadership have no basis in the School’s founding principles or precedent in its history. They include:

Attempted Change to the School’s Platform of Principles
Had this change been successful, it would have permanently prohibited Christians of certain denominations (e.g., Episcopal, Roman Catholic, Anglican, or Orthodox) from serving the School as faculty members or trustees. This effort was unsuccessful only because the original founding documents of the School deemed that any change to the Platform of Principles would legally effectively nullify the School’s existence. This unprecedented and careless attempt to change one of the School’s foundational pillars merits serious repercussions.

The Disenfranchisement of the Day Student Population
In 2009, a revision of the Prefect system to its current policy now requires day students to become boarders if they wish to serve as student leaders. This has created a classist system in which advantages and preferences, in the form of leadership opportunities, are given only to boarders. (http://www.stonybrookschool.org/student-life/leadership-opportunities)

Lack of Institutional Transparency
The flow of information to the larger School community––and the world outside of the School––from the headmaster and the board of trustees, has become non-existent, especially in terms of financial matters and the philosophical underpinnings of important decisions. Dissenting opinion is dismissed or ignored, and no attempt is made to gauge the School’s reputation from either the perspective of the School Community or the private secondary school or higher educational community.

Substantial Faculty Turnover
In the last few years, nearly one-third of the School’s faculty members have left, many in response to the leadership’s paradigm shift; some due to sectarian differences with the headmaster. Several have been removed for perceived insubordination.

Rewriting of the Statement of Educational Philosophy
The statement was re-written to de-emphasize the educational and college preparatory aspect of the School’s mission, and to stress instead the importance of the new conservative religious orientation of the School. The School’s standing in relation to our former peer institutions and concomitant college placements bear out that this philosophy has been put into practice.

A United SBS Community CAN Restore The Stony Brook School!