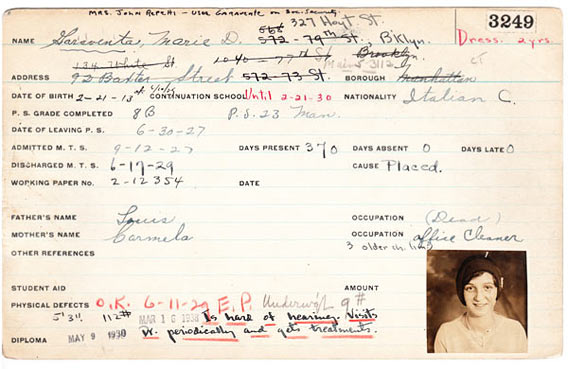 In 1996 Paul Lukas “stumbled upon” nearly 400 report cards from the Manhattan Trade School for Girls.  Most of them were from the 1920s.

If I found these report cards I would probably think of some way to analyze them and turn them into a book or an article.  Lukas has decided to devote his time and energy to tracking down the family members of these former students and returning the cards.  (I do hope that these cards are copied and placed in an archive somewhere).  Most of the girls who attended the Manhattan Trade School were born to immigrant parents–Italians and Jews mostly.

Lukas tells his story in a fascinating article at Slate.  Here is a taste:

I discovered the cards in 1996 (more on that in a minute). I found them fascinating, but I didn’t have a good sense of what to do with them, so for a long time I just kept them as curios and occasionally showed them to friends. Eventually, though, I decided to track down some of the students’ families (including Marie’s). Even after doing it numerous times, I still find it a bit surreal to call a stranger on the phone and hear myself saying, “Hi, you don’t know me, but I have your mother’s report card from 1929. Would you like to see it?”While a few people have responded to that opening line with suspicion or caution, most have been gracious, and curious. They’ve opened their homes to me and shared their family archives. And they’ve been captivated by the report cards, often learning new things about their loved ones and filling in gaps in their family histories. Most of them knew very little about this vocational school their ancestors had attended.That school, the Manhattan Trade School for Girls, turns out to have been a very interesting place. And a well-documented one, too. Within a decade of its 1902 founding, a book about it had been written and a 16-minute film about it had been shot. All of which comes in rather handy if you happen to be researching a bunch of the school’s students.