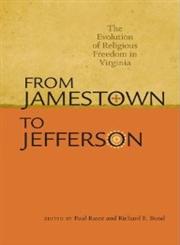 If you go to Google and type in “Religion in Jamestown” you will find a post I did on the subject back in July 2009.  Every September that post ends up being one of the most visited posts at The Way of Improvement Leads Home.  I am guessing that teachers and professors give their students some kind of project that asks them to compare the New England colonies with Jamestown and, since students now go to straight to Google when doing history projects, they end up at my post.

What I tried to argue in that post, and briefly in Was America Founded as a Christian Nation, was that Christianity was important in the first successful British-American colony.  Though I am not convinced that religion was able to shape the cultural climate of Jamestown in the same way that it shaped Plymouth or Massachusetts Bay, it did play a role in the everyday life of early Virginia.

I am not the only one making this point.  Earlier this year Paul Rasor and Richard Bond, both of Virginia Wesleyan College, edited From Jefferson to Jamestown: The Evolution of Religious Freedom in Virginia (University of Virginia Press, 2011).  Here is the promotional blurb:

From Jamestown to Jefferson sheds new light on the contexts surrounding Thomas Jefferson’s Statute for Religious Freedom—and on the emergence of the American understanding of religious freedom—by examining its deep roots in colonial Virginia’s remarkable religious diversity. Challenging traditional assumptions about life in early Virginia, the essays in this volume show that the colony was more religious, more diverse, and more tolerant than commonly supposed. The presence of groups as disparate as Quakers, African and African American slaves, and Presbyterians, alongside the established Anglicans, generated a dynamic tension between religious diversity and attempts at hegemonic authority that was apparent from Virginia’s earliest days. The contributors, all renowned scholars of Virginia history, treat in detail the complex interactions among Virginia’s varied religious groups, both in and out of power, as well as the seismic changes unleashed by the Statute’s adoption in 1786. From Jamestown to Jefferson suggests that the daily religious practices and struggles that took place in the town halls, backwoods settlements, plantation houses, and slave quarters that dotted the colonial Virginia landscape helped create a social and political space within which a new understanding of religious freedom, represented by Jefferson’s Statute, could emerge.

Rasor and Bond have assembled an impressive list of contributors.  They include:

From Jamestown to Jefferson is the best general overview I have seen on the complex relationship between religion and society in colonial Virginia.  If you have one book in your library on the subject, this should be it.