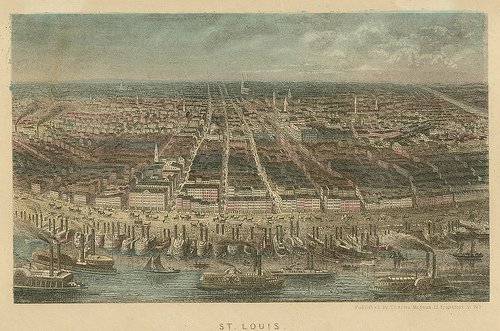 Forget about Frederick Jackson Turner’s frontier thesis. Well before the University of Wisconsin history professor suggested that the key to American identity was the settlement of the frontier, a group of Georg Hegel disciples were arguing that history had a direction, and it was all pointing to St. Louis.

Here is a taste of Kerry Howley’s article at The Daily:

In 1856, a Prussian immigrant named Henry Conrad Brokmeyer retreated deep into the Missouri woods with a gun, a dog and a copy of “Science of Logic,” a philosophical text by Georg Hegel. Alone with Hegel’s thoughts over the next two years, Brokmeyer became convinced that this abstruse work by a German 25 years dead could save the nation from the very divisions about to lead it into civil war. It didn’t, of course, and Missouri, a border state, would not escape a gruesome guerrilla war. But a decade later, Brokmeyer and a friend named William Torrey Harris convinced the elite of St. Louis that Hegel’s work was central to the recovery of their country, their city and their own lives. The Civil War, Brokmeyer said, was part of a dialectical process. In what turned out to be one of the oddest episodes in the history of American thought, a group of men known as the St. Louis Hegelians declared that the direction of history led to eastern Missouri.

Brokmeyer sold a warped Hegelianism just flattering enough to believe: History had a direction. That direction was west, from Europe to the United States. History would unfold in the direction of a world-historical city, culminating in a flowering of freedom under a rational state. While Hegel had assumed Europe to be the place to which all of history pointed — when he said “west,” he meant from Asia to Europe — Brokmeyer said history would keep on rolling across the Atlantic, toward the biggest American city west of the Mississippi: St. Louis.