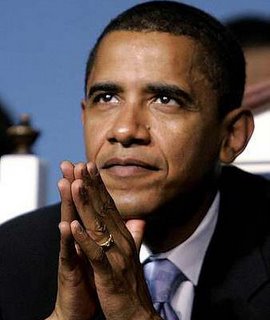 Anyone who does not believe that Barack Obama is a Christian should listen to Tuesday’s Easter Prayer Breakfast speech.  (Unless of course he was lying about everything he said in the speech in a subtle attempt to the disguise the fact that he is either a Muslim or the anti-Christ).

Here is a taste.  (You can read the entire transcript here).

We all live in the hustle and bustle of our work. And everybody in this room has weighty responsibilities, from leading churches and denominations, to helping to administer important government programs, to shaping our culture in various ways. And I admit that my plate has been full as well. (Laughter.) The inbox keeps on accumulating. (Laughter.)

But then comes Holy Week. The triumph of Palm Sunday. The humility of Jesus washing the disciples’ feet. His slow march up that hill, and the pain and the scorn and the shame of the cross.

And we’re reminded that in that moment, he took on the sins of the world — past, present and future — and he extended to us that unfathomable gift of grace and salvation through his death and resurrection.

In the words of the book Isaiah: “But he was wounded for our transgressions, he was bruised for our iniquities: the chastisement of our peace was upon him; and with his stripes we are healed.”


Over at Brainstorm, Jacques Berlinblau takes a critical look at Obama’s speech.  Berlinblau’s thoughts are interesting because he sounds a lot like the critics of the Christian nationalists that I write about in Was America Founded as a Christian Nation: A Historical Introduction. According to Berlinblau, Obama’s breakfast speech “shuts out nonbelieving Americans,” it “excludes,” and “demonstrates a clear preference for certain religious groups over others.”  These are the same things levied against the Christian Right when they promote the idea that America is a uniquely “Christian nation.”  Perhaps Obama has more in common with the Christian America crowd than we think.

Berlinblau’s critique aside, I am also intrigued by the way this speech is saturated with Christian theology and Biblical references (including multiple references to Jesus Christ).  I have said this before, but if we evaluate Obama’s faith in the same way that we evaluate the faith of the Founding Fathers (in terms of references to God, Jesus, the Bible, etc… in public addresses), then Obama may just be the most Christian president in American history.  For example, he has mentioned Jesus Christ dozens of times more than George Washington, who only mentioned him once or twice (depending on how you count).

I don’t know Obama’s heart, but he sure understands Easter.