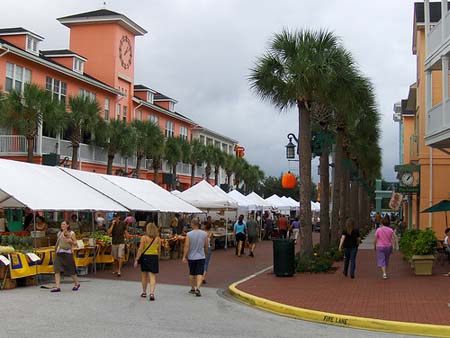 Back in the 1990s Disney corporation created the town of Celebration, Florida as a perfect little utopia–something straight out of a Disney movie.  Douglas Frantz and Catherine Collins moved to Celebration in 1997 with a contract to write a book about the town.  Now, fifteen years later, Celebration is experiencing some growing pains.  As Frantz and Collin’s write in today’s New York Times, perhaps this utopian experiment is “a small town after all.”

Here are a few snippets:

Reality seemed to catch up with the utopian village, which Disney gave up control of a few years ago, when residents awoke on Monday morning to find that one of their neighbors, a 58-year-old retired schoolteacher, had been murdered. The yellow crime-scene tape surrounding his condo contrasted with the nearby town square, which was decorated for Christmas and awash in holiday music from speakers hidden in the foliage. Then, on Thursday, another resident fatally shot himself after a standoff with sheriff’s deputies. The apparently unrelated deaths showed the world what people in Celebration already knew: life behind the town’s white picket fences wasn’t perfect after all.

The years have changed the footprint as well, and not for the better. Celebration’s initial design of a downtown core to emphasize walking over cars and friendliness over isolation started to disappear even before Disney ceded control. Ever-larger houses have spilled across hundreds of acres of reclaimed swamp, replacing the small-town feel with something closer to traditional suburban sprawl. The town now has about 10,000 residents.

There was another kind of blight, too. When we drove down our old street a few months ago to visit friends, two of the 16 houses stood empty, the paint peeling and the once-pristine lawns burned out in the scorching sun — a story repeated on almost every street in the town. The housing foreclosures that has swept across Florida hit Celebration hard. One real estate Web site recently listed 492 foreclosures in town, and housing prices have dropped sharply from the highs of the middle part of the last decade. The movie theater, once a focal point of downtown, shut its doors on Thanksgiving Day.