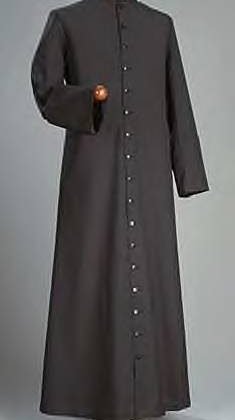 …But what I lament isn’t so much the loss of the cassock itself as the loss of the whole cache of cultural symbols of which it was once a part. The cassock once communicated the universal reality of priesthood to the local communities in which priests served. Every town once had a doctor, a butcher, a sheriff, as well as a priest. The child who grew up in each town was able to see the doctor’s stethoscope and identify it with the healing arts not just in some abstract sense but in the way that good old Doctor Smith administered them. The symbols that denoted these universal practices were intimately connected with the people who practiced them. The cassock was a symbol not just of priesthood. It was a symbol of Father Jones who baptized my children and was at my father’s bedside as he lay dying. And seeing these different symbols, such as the cassock and the white coat and the sheriff’s gold star badge, gave the child a sense that he wasn’t just growing up in a cluster of random people but in a community, a living organism in which each person played an important and unique role in the lives of others.

Ironically, it’s the very quest for uniqueness, for freedom of expression and freedom from unnecessary constraint, that has lead to the tyranny of homogeneity that we experience today. I have no idea whether there’s a butcher or a doctor living in my town. Everyone wears the same thing. We all express ourselves the same way, in the same button down shirts and slacks bought off the rack at Sears. The fact that we happen to live in proximity to each other is simply coincidence. There’s no purpose to it.

The universal symbols are gone, replaced by the universality of brand names and box stores. In the process, that which is unique to each local expression of community has become obscured. I’ve lived in different parts of three different states. Every time I move to a new place, I’m asked by the locals, “How do you like living here?” I’m never quite sure how to answer that question, and for the longest time I didn’t know why. And then one day it dawned on me, I couldn’t answer the question because I couldn’t figure out what the difference was between one place and the next. I ate at the same chain restaurants and bought my clothing at the same strip malls everywhere I went. The fact that it was eight degrees colder in New Haven in the winter time than it had been in the suburbs of Baltimore was hardly enough to give me a real sense that there was something that separated the two.

We need symbols, not just brands. We need symbols that speak to our hearts and that communicate deep truths about who we are and how we live. We need to know that there are differences between us that go beyond whether or not we happen to prefer PCs over Macs or Cheerios over Corn Flakes. We need to learn again that there is such a thing as calling and vocation, that each of us can be called upon to serve our communities in a special way, not simply by consuming but by producing the goods that hold our communities together, whether or not those goods are tangible.