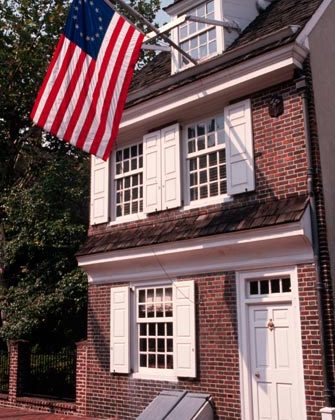 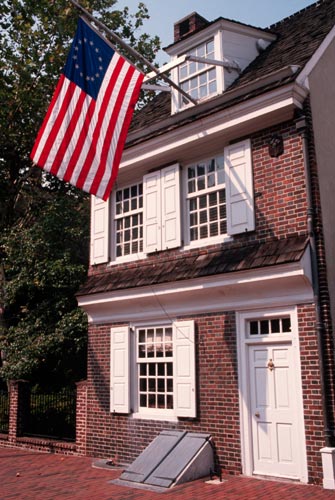 Last night I wrote a post about our upcoming trip to Philadelphia. In that post I suggested that my kids, as preparation for the trip, read Jack Rakove’s review of Gary Nash’s book on the Liberty Bell.

Another possible stop on our Philadelphia itinerary is the Betsy Ross House. So in preparation for THAT visit, I am going to have to have them read Historiann’s review of Marla Miller’s Betsy Ross and the Making of America. The review may be a little technical for them, so I will probably have to edit it, but it will be helpful nonetheless. Here is a snippet:

Thus, Betsy’s collaboration with the Revolutionary government as a flag maker can’t be dismisssed merely as wartime profiteering or political exigency. Miller offers two full chapters on the question of Betsy’s contribution to creating the U.S. national flag in the late spring of 1777, and concludes that there’s both verifiable merit and dubious myths in the family tales her daughter and grandson told in the nineteenth century. As we have learned about “The” Declaration of Independence, there were many flags for many different purposes and many different flagmakers working in Philadelphia at the time. Miller concludes that Betsy was certainly one of them, and that her work for the war effort as the very young widow Ross probably reflected her real political sympathies. On the other hand, while there’s no evidence one way or the other as to what kind of work she did during the British occupation of Philadelphia in 1777-78, Miller concludes that “it’s hard to imagine her finding among the suffering community of rebellious Philadelphians enough sources of income that she could refuse on principle to fabricate tassels, mattresses, chair covers, or camp equipage for enemy quarters during the entire course of the occupation,” 204-05.