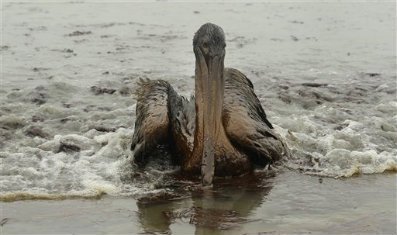 Here is what a commentator on Rod Dreher’s Beliefnet blog had to say about a post he did yesterday on oil-soaked birds in the Gulf Coast.

If you eat chicken and duck, you are NOT ENTITLED to bitch and screech and howl and beat your breast about the fate of a handful of “esthetically pleasing” birds.

This is all about high-class prissy-ass esthetics. Nothing else.

Dreher was not going to let this comment stand without a response. After a reactionary (and justified) response that called the commentator’s post “idiotic” and “nasty” and “disgusting,” he settled down and had some thoughtful things to say about why we should care about the Louisiana Pelicans. Here is a taste:

I want to make a couple of remarks about the idea that declaring animals edible evacuates the grounds for moral concern over how they are treated, which is to say, how they live and how they die. As I see it, the only consistent basis for this judgment is a scientistic, philosophically materialistic ethic that sees the natural world, including all non-human life within it, as lacking intrinsic moral value. If animals are just meat, then why should one really care whether they are raised in a healthy natural environment, or in crowded cages and pens? It may be regrettable that pelicans are dying in spilled oil, but so what? Does it ultimately matter if a wood duck meets his end choking in oil-soaked water, or falling from the sky with a breast full of buckshot?

If you are a Jew or a Christian, you should read your Bible. Man is given dominion over the animals, and permitted to eat animals for food. But man, as the most powerful creature by virtue of his intelligence, and the only creature endowed with moral responsibility, is also commanded by God to treat the natural world with an ethic not of exploitation, but of stewardship. Jews and Christians are not permitted to be indifferent to how they treat Creation. That many are is a cause for divine judgment.

The best non-religious answer I can think of to this is Matthew Scully’s utterly remarkable book “Dominion.” My copy of the book is at my office, and it’s Saturday, so I can’t quote from it here. But here is a link to an op-ed against factory farming that Matthew wrote in 2006. In an interview with National Review (to which Scully, a conservative Republican, has contributed over the years), Scully said that the way we regard animals is a good test of our character. Excerpt:

In the same way that human beings are prone to abusing any other kind of power — by forgetting that we are not the final authority. The people who run our industrial livestock farms, for example, have lost all regard for animals as such, as beings with needs, natures, and a humble dignity of their own. They treat these creatures like machines and “production units” of man’s own making, instead of as living creatures made by God. And you will find a similar arrogance in every other kind of cruelty as well.