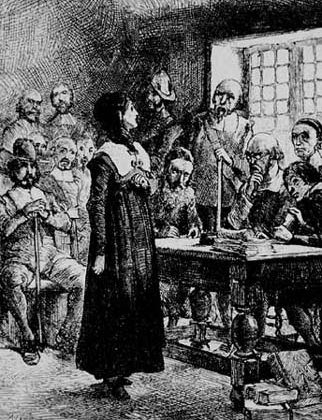 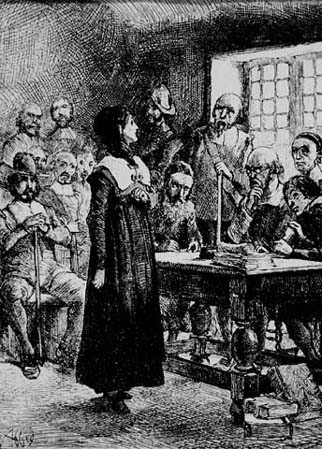 Anne Hutchinson is fun to teach to evangelical students. Many of them are conflicted about her legacy in American culture. Some of them see her as a prototype for evangelical feminism, religious freedom, and the good old American spirit of resisting governmental authority. Others see her as a problem– someone who got in the way of the Puritan “city upon a hill.” Either way, she was a troublemaker.

Over at Killing the Buddha Arthur Goldwag has a reflection on the role of heretics in American culture. He concludes that we need heretics like Hutchinson, strong individuals who “simply don’t know how to say ‘yes’ to anything that is dogmatic, authoritarian, or unspiritual.” How American! Here are a few snippets, including a few references to the Texas Social Studies controversy:

Consider Anne Hutchinson (1591-1643), whose arguments with mainstream Puritanism made her, at one time, the most hated woman in America. “Your opinions fret like a gangrene and spread like a leprosy, and infect far and near, and will eat out the very bowels of religion,” her erstwhile teacher Minister John Cotton admonished her, as she was excommunicated from the Church of Boston and consigned to the mercies of the wilderness. The Puritans celebrated when they received word of her death seven years later; its grisly circumstances—she and more than a dozen members of her household, including six of her fifteen children, were scalped by an Indian war party—were regarded as wondrous evidence of divine providence…

But three and a half centuries after her death, she still has the power to inspire—and, just as she did in her own day, to drive some people crazy. Just as I began to write these pages, a story broke in the news about the Public School Textbook Committee that was recently appointed in Texas. One of its members, Peter Marshall (whose eponymous ministry is “dedicated to helping to restore America to its Bible-based foundations”), objected when a proposed fifth grade history textbook included Anne Hutchinson in a list of “significant colonial leaders” along with William Penn, John Smith, and Roger Williams. “Anne Hutchinson does not belong in the company of these eminent gentlemen,” Marshall wrote. “She was certainly not a significant colonial leader, and didn’t accomplish anything except getting herself exiled from the Massachusetts Bay Colony for making trouble…”

But when all is said and done, the Texas textbook commissioner might have said it best: Anne Hutchinson was a troublemaker—her most important legacy was her very ungovernableness. Hutchinson epitomized Jesus’s all-or-nothing morality and Protestantism’s dissenting spirit. During America’s birth pangs, when our Puritan forefathers were assembling the machinery of a theocratic state, the truest, deepest believer of them all—a woman and a midwife yet, who was pregnant most of her adult life and up to her elbows in blood and bodily fluids—tried to toss a monkey wrench into the works.