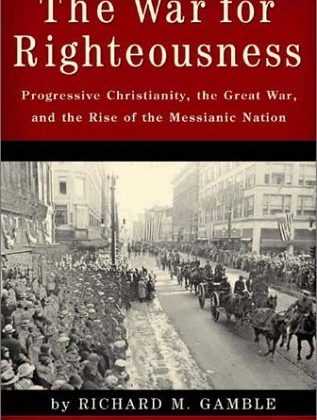 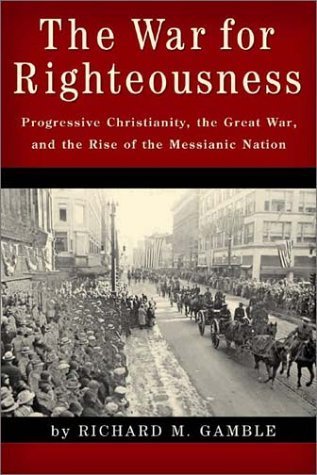 On the suggestion of Russ, one of our loyal readers, I just finished Richard M. Gamble’s The War for Righteousness: Progressive Christianity, the Great War, and the Rise of the Messianic Nation (ISI Books, 2003). Russ is right. This is a fascinating and revealing look at liberal Protestantism and the American involvement in World War I.

Gamble argues that “progressive clergy…played a vital role in turning at least their side of the Great War into a ‘war for righteousness,’ an ultimate spiritual battle to rid the earth of a pagan nation that impeded the progress of God’s righteous kingdom.”

Gamble shows how the Federal Council of Christian Churches, the leaders of the movement known as the Social Gospel, and prominent liberal clergy from across the country, pushed hard to get Woodrow Wilson to bring the United States into the War because they perceived it as an opportunity to, as one progressive Protestant put it, advance America’s status as a”Christ nation to the other nations of the world.”

They even chided Wilson in 1916 and early 1917 for trying to pursue a policy of peace in Europe, claiming that Germany needed to be punished by God for the sinking of the Lusitania and the invasion of Belgium. The United States would be God’s agent in carrying out that punishment.

I read The War for Righteousness shortly after I reread George Marsden’s classic Fundamentalism and American Culture. Though some Fundamentalists such as Billy Sunday were strong supporters of American involvement in World War One (and occasionally even joined with some of these Protestant liberals in the cause), and most Fundamentalists eventually supported American intervention, Marsden shows that their decision to follow Wilson into war required some soul-searching. If Gamble is right, liberal Protestants were seldom as cautious. It was the Modernists, not the Fundamentalists, who were most effective at fusing patriotism and Christianity.

Gamble’s presentation of the liberal Protestant commitment to internationalism makes George W. Bush and the neoconservatives look like Ghandi and today’s Christian nationalists look like Anabaptists This is a great book–a real hidden gem.