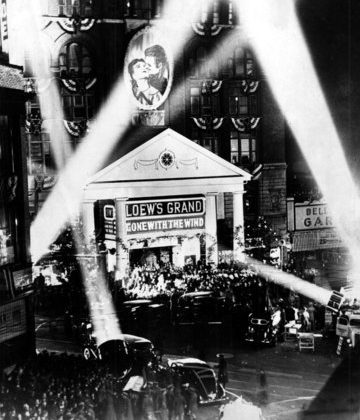 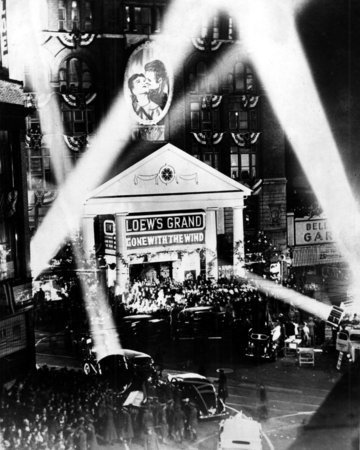 Seventy years ago last month the film Gone With the Wind made its appearance in American movie theaters. Jay Bookman at the Atlanta Journal-Constitution has a nice historical reflection on the film’s opening in Atlanta. Bookman quotes from Time magazine’s coverage of the event:

Atlanta’s Mayor William B. Hartsfield proclaimed a three-day festival. Hartsfield urged every Atlanta woman to put on hoop skirts and pantalets, appealed to every male to don tight trousers and a beaver (hat), sprout a goatee, sideburns and Kentucky colonel whiskers.

While the Stars and Bars flapped from every building, some 300,000 Atlantans and visitors lined up for seven miles to watch the procession of limousines bring British Vivien Leigh (in tears as thousands welcomed her “back home”), Clark Gable, his wife Carole Lombard, Producer David O. Selznick, Laurence Olivier and others from the airport. Crowds larger than the combined armies that fought at Atlanta in July 1864 waved Confederate flags, tossed confetti till it seemed to be snowing, gave three different versions of the Rebel yell, whistled, cheered, goggled.

Bookman reminds us that Hattie McDaniel, the actress who played “Mammie” and who received an Academy Award for her performance in the film, was not permitted to attend the festivities because of the color of her skin.

Hat tip to Civil War Memory, which also has some thoughts about teaching the film to high school students.