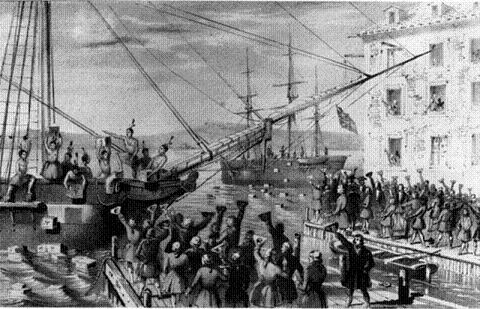 Over at Boston 1775, Chris Bahne, author of The Complete Guide to Boston’s Freedom Trail, is guest blogging about the Boston Tea Party. I found today’s post interesting for two reasons.

First, history students should take note of the way Bahne interprets an East India Company invoice. At first glance, it appears that this document cannot tell us much about anything. But in the hands of a historian, it comes to life, allowing us to tell a more compelling story about the Boston Tea Party.

Second, we know that 342 chests of tea were dumped into Boston Harbor, but just how much tea was this? Bahne writes:

The third column of the account lists the weights of tea, by kind and by ship. No totals are provided in the original document, but we can add up the numbers ourselves. They come to a grand total of 92,616 pounds avoirdupois of that pernicious herb! That’s more than 46 tons in the U.S. system of weights (“short tons” in the U.K.’s old measure); or, for you metric aficionados, it’s 42,009.9 kilograms. In terms that the tea drinker can understand, there are typically 100 tea bags in a half-pound box sold in the supermarket today. So that comes to 18,523,200 cups of tea!

There were about 16,000 inhabitants living in Boston then: we’re talking three cups of tea a day, for every man, woman, child, and infant in the town, every day for more than a year. That’s a lot of tea.

A lot of tea indeed! This was a huge shipment. No wonder England followed-up with the Coercive Acts.

Bahne’s post is part of a series of posts on the Boston Tea Party, so head over to Boston 1775 and keep reading.