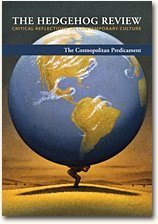 reading about cosmopolitanism. I wondered what it meant in the eighteenth-century to be a “citizen of the world.” For those of you have read the book, you know that I try to unpack the tensions in Philip Vickers Fithian’s life between cosmopolitan dreams and a love of home. I concluded that Fithian represented a “cosmopolitan rootedness” (which, I argue, is slightly different than the “rooted cosmopolitanism” often promoted by those who write about cosmopolitanism today). In other words, his ambition to be a member of a larger “republic of letters” could only be understood through his deep and abiding commitment to the rural, agricultural, and Presbyterian world of a place in southern New Jersey which he called “Cohansie.”

With all of this in mind, I have been having fun working through the most recent issue of the Hedgehog Review: Critical Reflections on Contemporary Culture. The theme is “The Cosmopolitan Predicament.” When I received the issue in the mail I began reading from the back. Anyone interested in knowing more about cosmopolitanism should start with Jeffrey S. Dill’s excellent bibliographical essay. He divides recent works on cosmopolitanism into six helpful categories: “Introductions and Historical Overviews,” “The History of Cosmopolitanism,” “Political and Legal Cosmopolitanism,” “Cultural and Ethical Cosmopolitanism,” ‘Empirical Investigations: ‘Actually Existing Cosmopolitanism’,” and “Cosmopolitan Critics.”

For those commentators on this blog who have called me a liberal, you might be surprised to learn that one of my favorite quotes on world citizenship comes from Edmund Burke:

“…to be attached to the subdivision, to love the little platoon we belong to in society, is the first principle (the germ as it were) of public affections. It is the first link in a series by which we proceed towards a love to our country, and to mankind.”